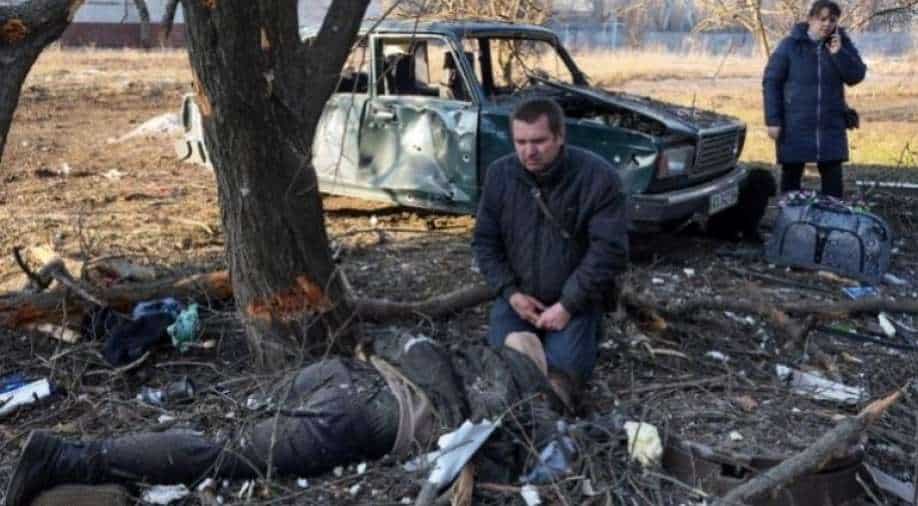 A man mourns near a body as a Russian air attack damages an apartment complex outside Kharkiv. Photograph:( Twitter )

A photograph of a Ukrainian guy grieving next to the body of another man killed in a Russian attack on Thursday has gone viral.According to some stories, the deceased was his son.

On Thursday, Russia launched an all-out land, air, and sea invasion of Ukraine, the worst attack by one country against another in Europe since World War II, fulfilling the West's greatest fears.

According to Mirror, distressing photo of a man crying over the body of what appears to be a relative has highlighted the brutal reality of the looming conflict.

As the sun rose this morning in Ukraine, the early toll of Russian missile strikes on densely populated cities began to emerge.

Also read | ‘Won’t bow down’: Ukraine president vows to fight back against Russia

An attack on a military unit in Podilsk, near Odessa, killed six people and injured seven, according to officials.

The photos are thought to have been taken in Donbas, which is located in the separatist Donetsk area of the country's east.

One of the strikes seemed to have killed him.

The man is shown on his knees in the rubble, crying and holding his hands to his face in a heartbreaking photo.

Ukrainian President Volodymyr Zelenskyy has called on all citizens who are ready to defend the country from Russian forces to come forward, saying Kyiv will issue weapons to everyone who wants them.