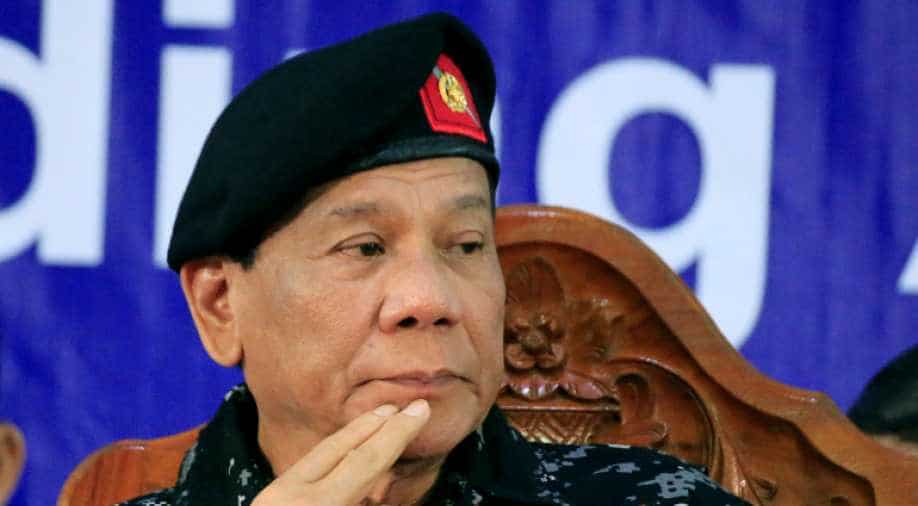 President Rodrigo Duterte said Wednesday he was pulling the Philippines out of the treaty underpinning the International Criminal Court, which is examining his deadly drug war.

The outspoken leader, who is accused of stoking the killing of drug suspects with inflammatory statements, has fiercely pushed back since the Philippines became the first southeast Asian nation put under "preliminary examination" by the court's prosecutors.

The ICC announced last month it was launching a study of the killings, which Philippine police put at 4,000 but rights groups say is actually triple that number.

Officially quitting the court requires a year's notice and experts say pulling out does not preclude an investigation of the deaths, which have drawn international concern.

"It is apparent that the ICC is being utilised as a political tool against the Philippines," Duterte said in a statement, adding the ICC examination was "unduly and maliciously created".

"I therefore declare and forthwith give notice... that the Philippines is withdrawing its ratification of the Rome Statute effective immediately," he added.

Opened in 2002, the ICC is the world's only permanent war crimes court and aims to prosecute the worst abuses when national courts are unable or unwilling.

The Philippines, under previous President Benigno Aquino, ratified in 2011 the Rome Statute which underpins the ICC, giving the tribunal authority to investigate crimes on its soil.

Rights advocates and attorneys said quitting the court would not eliminate the possibility of a case before it.

"The Philippines' intention to walk away from the International Criminal Court is unfortunate, but it doesn't shut the door on the prosecutor's scrutiny of the government's horrendous track record of grave abuses," said Param-Preet Singh of Human Rights Watch.

- 'Unprecedented, outrageous attacks' -
Celeste Mallari, a professor at the Philippines College of Law, said the court can "investigate any acts that have been done from the time the Philippines became a member of the ICC... until one year after we gave our notice of withdrawal".

However, should the Philippines fully withdraw from the court it would not be the first to do so, as Burundi became the first ever nation to leave in October 2017.

In a wave of unprecedented defections, other African nations -- Zambia, South Africa, Kenya and Gambia -- have also made moves to quit or expressed interest to withdraw as they accused the court of being biased against Africans.

Russia in 2016 dealt the ICC another blow by withdrawing its signature from the Rome Statute.

Duterte, who is buoyed by high popularity ratings in the Philippines, has fiercely defended the drug war as a battle to bring safety to the nation's 100 million people.

On Wednesday he repeated that defence, citing "baseless, unprecedented and outrageous attacks on his person as well my administration".

"The acts allegedly committed by me are neither genocide nor war crimes. The deaths occurring in the process of legitimate police operations lacked the intent to kill," he added.

But even as early as October 13, 2016, when Duterte had only been in office less than four months, the ICC prosecutor Fatou Bensouda said in a statement that she was "deeply concerned" over reports of extra-judicial killings of over 3,000 alleged drug users and pushers.

Adding pressure on Manila, in February, the UN Human Rights Council in Geneva raised the country's human rights record, with Icelandic Foreign Minister Gudlaugur Thor Thordarson calling on the Philippines to accept the visit of a UN Special Rapporteur.

Philippine officials had initially said in February that the country was ready to cooperate but asked for fairness.

Duterte's spokesman Harry Roque also said they would refuse a visit by one such rapporteur Agnes Callamard, who had previously been pressing to investigate the killings.

But Roque has also said the ICC has no jurisdiction over the case because the tribunal was intended as a "court of last resort" and the Philippine courts were fully functioning.