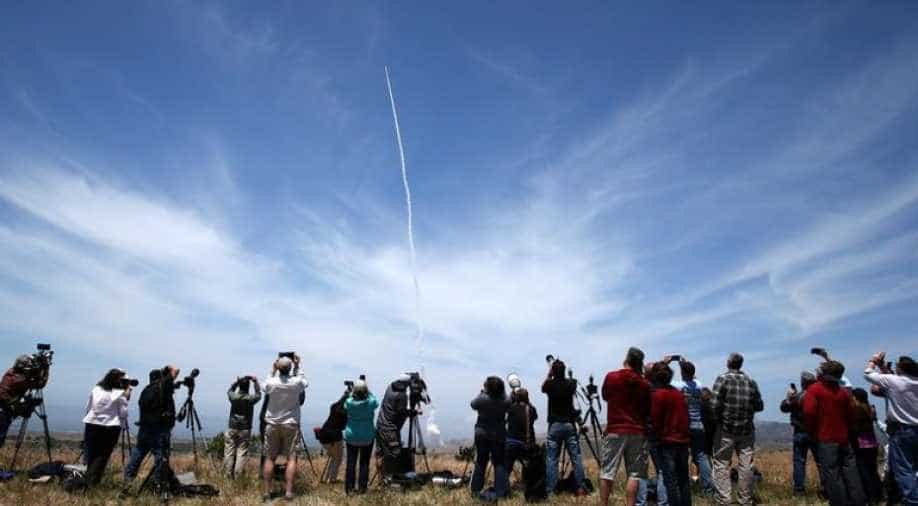 People watch as the Ground-based Midcourse Defense (GMD) element of the US ballistic missile defense system launches during a flight test from Vandenberg Air Force Base, California, US, May 30, 2017. Photograph:( Reuters )

A successful test was by no means guaranteed and earlier the Pentagon sought to manage expectations||'This is one element of a broader missile defence strategy...,' said a pentagon spokesman

The US military on Tuesday cheered a successful, first-ever missile defence test involving a simulated attack by an intercontinental ballistic missile (ICBM), in a major milestone for a programme meant to defend against a mounting North Korean threat.

The US military fired an ICBM-type missile from the Kwajalein Atoll in the Marshall Islands toward the waters just south of Alaska. It then fired a missile to intercept it from Vandenberg Air Force Base in California.

Experts compare the job to hitting a bullet with another bullet and note the complexity is magnified by the enormous distances involved.

The Missile Defense Agency said it was the first live-fire test against a simulated ICBM for the Ground-based Midcourse Defense (GMD), managed by Boeing Co, and hailed it as an "incredible accomplishment".

"This system is vitally important to the defence of our homeland, and this test demonstrates that we have a capable, credible deterrent against a very real threat," Vice Admiral Jim Syring, director of the agency, said in a statement.

A successful test was by no means guaranteed and the Pentagon sought to manage expectations earlier in the day, noting that the United States had multiple ways to try to shoot down a missile from North Korea.

"This is one element of a broader missile defence strategy that we can use to employ against potential threats," Pentagon spokesman Captain Jeff Davis told reporters.

Prior to Tuesday's launch, the GMD system had successfully hit its target in only nine of 17 tests since 1999. The last test was in 2014.

North Korea has dramatically ramped up missile tests over the past year in its effort to develop an ICBM that can strike the US mainland.

Riki Ellison, founder of the Missile Defense Advocacy Alliance, described the test as "vital" prior to launch.

"We are replicating our ability to defend the United States of America from North Korea, today," Ellison said.

Failure could have deepened concern about a programme that according to one estimate has so far cost more than $40 billion. Its success could translate into calls by Congress to speed development.

In the fiscal year 2018 budget proposal sent to Congress last week, the Pentagon requested $7.9 billion for the Missile Defense Agency, including about $1.5 billion for the GMD programme.

A 2016 assessment released by the Pentagon's weapons testing office in January said that US ground-based interceptors meant to knock out any incoming ICBM still had low reliability, giving the system a limited capability of shielding the United States.