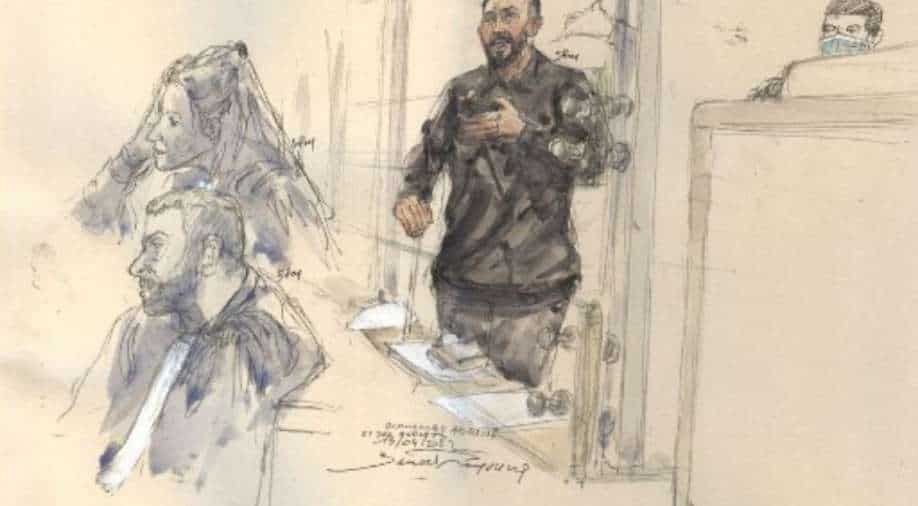 This court-sketch made on April 13, 2022, shows co-defendant Mohamed Abrini during the trial of November 13, 2015 Paris and Saint-Denis attacks, taking place in a temporary courtroom set up at the "Palais de Justice" courthouse in Paris. Photograph:( AFP )

For the plaintiffs in the case, including the loved ones of victims of the November 2015 attacks that killed 130 people, this was testimony they had been waiting months to hear

The last surviving suspected assailant in the deadly 2015 Paris attacks told a court Wednesday that he changed his mind about going through with the killings at the last moment.

"The objective I was given was to go to a cafe in the 18th" district in northern Paris, Salah Abdeslam told the special Paris court hearing the case.

For the plaintiffs in the case, including the loved ones of victims of the November 2015 attacks that killed 130 people, this was testimony they had been waiting months to hear.

Abdeslam, 32, said he was told about plans for the attack in Paris on November 11, two days before they were carried out.

That happened at a meeting in Charleroi, in Belgium, with Abdelhamid Abaaoud, who is accused of having masterminded the attacks.

Until then, said Abdeslam, he thought he was going to be sent to Syria. Instead, he was told he had been chosen to carry out an attack using an explosive belt.

"It was a shock for me, but he ended up by convincing me," he added.

"I ended up accepting and saying, 'Okay, I'll go ahead with it'."

But at that meeting, he was given no details about the targets for the attack.

When he ultimately did not go through with the attack, he told the court how he took his car and drove around Paris at random until it broke down.

Then he got out and walked, he said, saying his memories of that period were "confused".

Pressed by the president of the court Jean-Louis Peries, he said only that he knew what he had been supposed to do.

The attackers killed 130 people in suicide bombings and shootings at the Stade de France stadium, the Bataclan concert hall and on street terraces of bars and restaurants on November 13, 2015, in France's worst peacetime atrocity.

Abdeslam's older brother Brahim opened fire on a cafe terrace before blowing himself up.

Earlier in court another defendant, Mohamed Abrini, said Abdeslam simply had not had the nerve to go through with the attack.

Abrini, who is accused of having provided weapons and logistical support to the attackers, said he had seen Abdeslam when he turned up at a safe house a day after the attacks.

"He was exhausted, tired, he looked pale," said Abrini.

One of the organisers of the attacks had yelled at him for not having blown himself up.

"I think he told them that his belt hadn't worked," said Abrini.

Abdeslam told the court last month that in fact he had been lying about the malfunction.

After surviving the attack, Abdeslam fled to the Molenbeek district of Brussels where he grew up. He was captured in March 2016.

Alongside Abdeslam, co-defendants are answering charges ranging from providing logistical support to planning the attacks, as well as supplying weapons.

Eiffel Tower to get 60-million-euro paint job and not be repaired: Reports