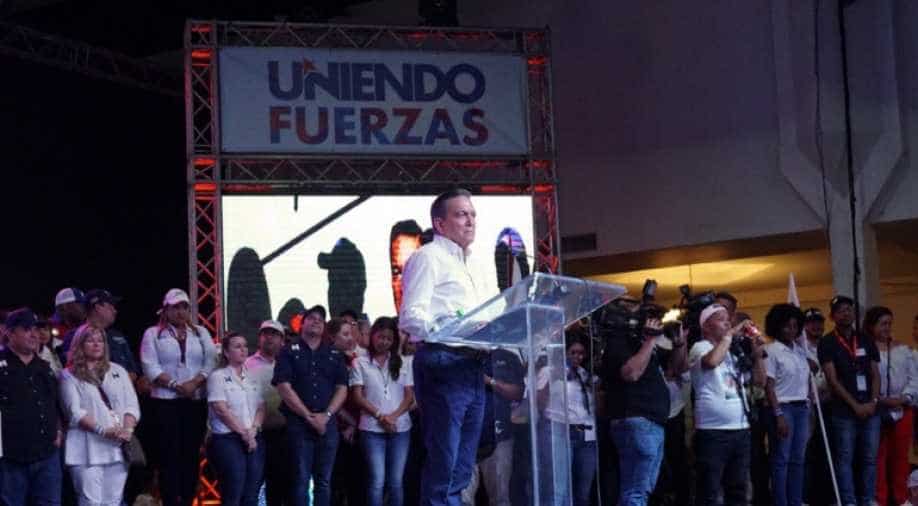 But Panama's Electoral Tribunal has yet to announce an official result due to the narrow difference in tallies between contenders for the country's top office.

Former Panamanian minister Laurentino Cortizo declared victory in presidential polls on Sunday that saw a large number of voters turn out amid concerns over corruption scandals and the country's image as a money launderer's paradise.

But Panama's Electoral Tribunal has yet to announce an official result due to the narrow difference in tallies between contenders for the country's top office.

"I feel very happy. I won. We won. What we have to do now is join forces as a country," Social Democrat Cortizo told reporters.

Cortizo was favoured to win, with pre-election polls giving him a 10-point lead over his closest challenger, former foreign minister Romulo Roux of the Democratic Change party. Independent Ricardo Lombana was a close third in the polls.

With 90.9 per cent of the vote counted, Cortizo led with 33 per cent, followed by Roux with 31 per cent and Lombana with 19.5 per cent, according to the Electoral Tribunal's website.

Corruption scandals played a significant role in election campaigning in a country struggling to shed its image as a money-laundering paradise following the Panama Papers scandal three years ago.

Equally damaging was the admission by Brazilian construction giant Odebrecht that it had paid $59 million in bribes in Panama between 2010 and 2014 to secure major public works contracts.

Panama is home to the strategic canal that links the Atlantic and Pacific oceans, making it a key conduit in the global maritime trading system.

Cortizo, a 66-year-old former agriculture minister known popularly as "Nito," said he wanted to "rescue and transform Panama" and "leave a legacy" untainted by corruption.

His supporters chanted "Nito, Nito!" as he cast his ballot in Panama City.

The surprise candidate in the race, lawyer and journalist Lombana, had surged in the polls ahead of the vote on an anti-corruption ticket, garnering almost 20 per cent of voter intentions, compared to Cortizo's 36 per cent.

Lombana, a 45-year-old former Panamanian consul to Washington, had hit out at the traditional parties, a popular tactic at a time when public confidence in the political establishment has been eroded by numerous scandals.

"Independent candidates have surged because citizens are fed up with what partisan politics have brought the country; they are fed up with corruption," he told reporters before casting his ballot.

Speaking to AFP, Dolores De Gracia said she would vote for Lombana "because in truth I'm looking for a change, this country needs a change. I trust him and I hope the corruption will end."

In recent days, Lombana had gotten a boost from the public backing of singer Ruben Blades, a legend of salsa.

While Blades did not mention Lombana by name, it was clear he was referring to the outsider candidate when he called on voters to pick an independent candidate promising constitutional reform in a bid to end corruption.

"If our country continues with these corrupt institutions, it will explode," said Blades, predicting that would lead to "violent reactions."

Blades is no political novice himself, having run unsuccessfully for president in 1994 and held the position of tourism minister from 2004-2009.

- Inequality and high costs -
Roux, 54, is a former chairman of the Panama Canal Authority and had tried to appeal to Panamanians who have struggled with inequality and high living costs, as well as a health and welfare crisis, despite a growing economy.

In his campaign, Roux was keen to point to the economic achievements under the now-jailed former president Ricardo Martinelli when he was foreign minister.

He has also managed to remain untainted by the multiple corruption accusations leveled against Martinelli, president from 2009-2014, that have seen the 67-year-old jailed while awaiting trial.

In addition to the president, Panamanians voted to elect 71 deputies, 81 mayors and 700 local lawmakers.

It was the sixth presidential election since the United States' 1989 invasion to overthrow the Manuel Noriega dictatorship.