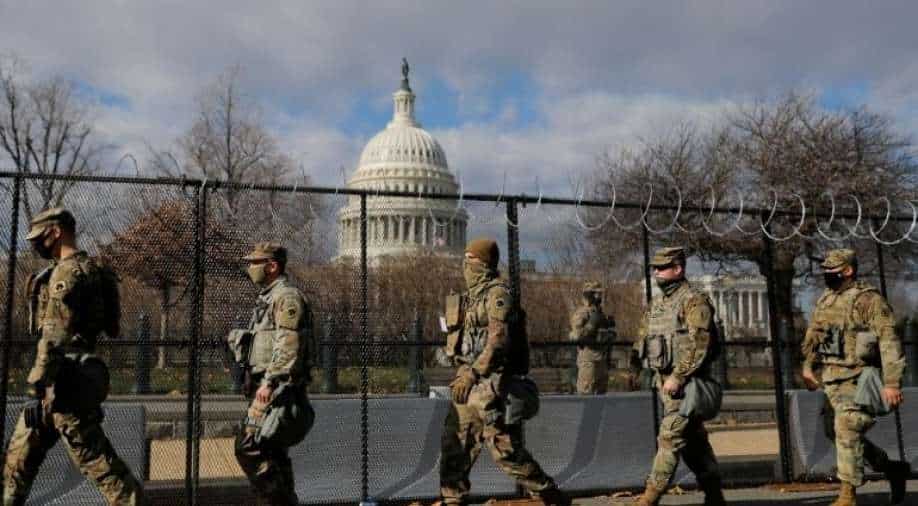 Members of the National Guard patrol near the US Capitol building ahead of US President-elect Joe Biden's inauguration, in Washington, US  Photograph:( Reuters )

Meanwhile, a decision to turn a chilly underground parking garage into an overnight billet for National Guard troops in Washington to protect Biden's inauguration has stirred an uproar

Over 150 National Guard troops deployed to Washington, D.C., to provide security for President Joe Biden's inauguration have tested positive for the coronavirus, a US official said on Friday.

The US government imposed unprecedented security measures in the city following the deadly January 6 attack on the Capitol by supporters of former President Donald Trump, including fences topped with razor wire and checkpoints manned by National Guard.

The official, speaking on the condition of anonymity, said the number of National Guard troops who tested positive could rise but was still a small fraction of the more than 25,000 troops deployed in the city over the past few days.

The United States reported more than 4,000 daily deaths from COVID-19 for a second consecutive day on Thursday, bringing the cumulative number of US lives lost to almost 410,000.

The military has said arrangements are being made for thousands of troops to return home, and that about 15,000 are expected to leave Washington within the next five to 10 days.

Some 7,000 National Guard personnel are expected to stay at least through the end of the month, officials have said. A smaller number of troops could stay longer.

Meanwhile, a decision to turn a chilly underground parking garage into an overnight billet for National Guard troops in Washington to protect Biden's inauguration has stirred an uproar.

A number of the 25,000 troops standing guard around the US Capitol in recent days in the wake of the insurrection had been allowed to take breaks and naps in between long shifts on the floors of the building housing the US Congress.

But on Thursday afternoon, after the legislature resumed work a day after the Biden inauguration, someone decided instead to force them out to a nearby parking garage.

Photos that spread quickly over the internet showed troops stretched out under fluorescent lights in parking slots, with few toilets, outlets for charging phones or other facilities.

Some members of Congress, noting that many of the troops came from their home states, voiced outrage.

"This is an insult to all National Guard units that followed orders and served in the cold and rain through the night without fail. They protected our Capitol when we needed them most," said Representative Brendan Boyle on Twitter.

This is an insult to all National Guard units that followed orders and served in the cold and rain through the night without fail. They protected our Capitol when we needed them most. (thread)https://t.co/429OpjUNU5

"What happened was an outrage and it will never happen again," said Chuck Schumer, the new Senate Majority leader, as he walked in a hall in the Capitol with dozens of soldiers sleeping on both sides.

Schumer said nobody knew exactly who ordered the part-time soldiers moved to the garage.

In the afternoon, first lady Jill Biden also paid a surprise visit to a group of military personnel on duty in Congress, offering them chocolate chip cookies and posing for photos.

"The National Guard will always hold a special place in the hearts of all the Bidens," she said. President Joe Biden's late son, Beau, was a member of the Delaware National Guard.