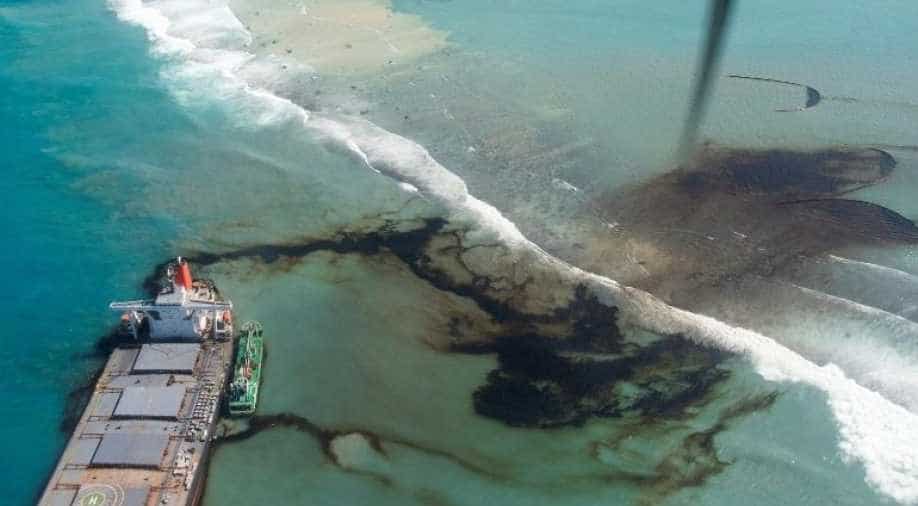 A general view shows the bulk carrier ship MV Wakashio, that ran aground on a reef, at Riviere des Creoles, Mauritius, in this handout image obtained by Reuters on August 11, 2020 Photograph:( Reuters )

Mauritius is home to world-renowned coral reefs. Now, thousands of species run the risk of drowning in a sea of pollution

The oil leakage from a Japanese bulk carrier off the coast of Mauritius is causing the ocean life around the carrier to die.

In Pics: Images show the extent of ecological damage caused by oil spill off Mauritian coast

On Tuesday, volunteers fished out scores of dead eels dripping in oil in a bid to skim the oil off the surface in what are considered the most pristine beaches in the Indian Ocean. An estimated 1,000 tonnes of oil is currently in the ocean, and more expected to flow in as the ship nears a breaking point.

Mauritius is home to world-renowned coral reefs. Now, thousands of species run the risk of drowning in a sea of pollution.

The pristine turquoise waters of Mauritius have turned murky brown. Thousands of endangered species and spectacular corals are at risk. A Japanese ship owned by the Nagashiki shipping company has been oozing fuel into the island nation's seawater.

The MV Wakashio believed to have been carrying 4,000 tonnes of fuel oil ran aground on a coral reef on July 25 and now a massive round-the-clock clean-up drive is underway.

Mauritians have made floating booms of human hair and leaves to mop up the oil from leaking further.

Some hair salons are even offering discounts to those donating hair.  A state of emergency has been declared in Mauritius as fishermen try and salvage their precious waters. For now, close to 500 tonnes of oil has been safely pumped out of the water.

What is of grave concern is that large cracks have appeared in the hull of the cargo ship which has prompted the prime minister to warn that it may break in two.

Mauritius is home to some of the most spectacular coral reefs in the world. It's rich flora and fauna attract tourists from across the globe.

Tourism is a major contributor to this island economy and added around $1.6 billion to its coffers last year. Authorities are worried that the oil spill near the blue bay marine park may endanger the corals, fish and other marine life and locals worry that this catastrophe could hamper their livelihood.

A spokesperson for the Mitsui Osk Lines, the operator of the ship, has profusely apologised for the spill.

An aerial view of the Mauritius coastline serves as a reminder of the havoc wreaked by mankind upon nature. For now, the entire country's ecosystem hangs in the balance.

Did Elon Musk sacrifice safety in his push for self-driving cars?