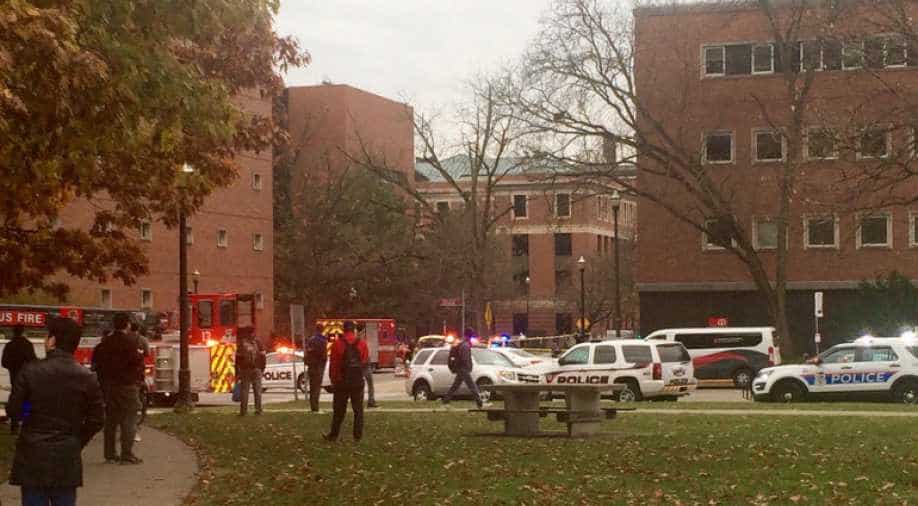 ?Run Hide Fight,? the school wrote in a tweet. The school said the apparent incident happened at Watts Hall, a science and engineering building. Photograph:( Twitter )

A young man reportedly of Somali descent rammed his car into a crowd of pedestrians at Ohio State University and attacked them with a butcher knife Monday, injuring nine people before he was shot dead by police.

Columbus police chief Kim Jacobs said investigators were considering the "possibility" that the bloody rampage, which left one person in critical condition, was a terror attack.

The assault triggered a tense lockdown at the university's main campus in Ohio, with panicked students hiding in bathrooms before the scene was declared secure.

Just before 10:00 am (1500 GMT), officials told a news conference, police were alerted that a car had struck pedestrians on campus, and that the driver had jumped out wielding a large knife.

"He exited the vehicle, and used a butcher knife to start cutting pedestrians," said Craig Stone, chief of police at the university.

Jacobs said there was no indication of multiple suspects, despite witness accounts suggesting several assailants were involved.

CBS News quoted a federal law enforcement official as saying he "has been tentatively identified as a young man of Somali descent," aged around 20.

Law enforcement officials quoted by NBC News said he was an 18-year-old student at Ohio State, a Somali refugee and legal permanent US resident.

The rampage comes two months after a Somali immigrant stabbed 10 people at a mall in Minnesota, before he was fatally shot by an off-duty police officer.

The Minnesota assailant, 20-year-old Dahir Ahmed Adan, was described as "radicalised" and the Islamic State group claimed the attack as the work of an IS "soldier."

Ohio State students quoted by US media described panicked scenes as the attack unfolded at the huge campus, one of the largest universities in the United States.

An unnamed student quoted by the local NBC affiliate said students had evacuated a building due to a fire alarm, and that a man had then "started slashing at them" with a blade.

"There were one or two people inside a car and they tried running over people," the student said. "One person jumped out and started slashing people."

Authorities lifted the alert shortly after 11:30 am, less than two hours after the lockdown began.

"Shelter in Place lifted. Scene is now secure. ALL classes are canceled on Columbus campus for the remainder of the day," the OSU emergency management services tweeted.

A subsequent tweet advised the public to avoid the area in the north of the sprawling campus, saying: "Police continue to process scene."

Nine people were transported to area hospitals -- eight of them in stable condition and one critical, he said.

Andrew Thomas, chief medical officer at Ohio State's Wexner medical center, said four people were being treated for stab wounds, and four for wounds related to being hit by the car while a ninth was still being assessed.

They were being treated at Wexner and at two other medical facilities in Columbus, he said.

The university's emergency management service had initially urged students and staff to shelter in place amid reports of an active shooter on site.

SWAT teams fanned out across the facility and an FBI team was also on the scene.

Details were murky as the situation unfolded, but several students reported witnessing a car-ramming, not a shooting.

"I was right there, and there was no one shot," student Joseph Noll told WBNS. "Someone DID run over a crowd of people with their car. I can tell you that for sure."

"I just heard some screams, and I saw people running," he said.

Student Cydney Ireland told ABC she was walking out of class when she also heard screams.

"Everybody was running in any direction they possibly could, students were running out of the classroom building," she said from her hiding spot in a locked bathroom.

Ohio State has roughly 60,000 students on the main campus in Columbus, which sprawls across more than 1,900 acres (770 hectares).