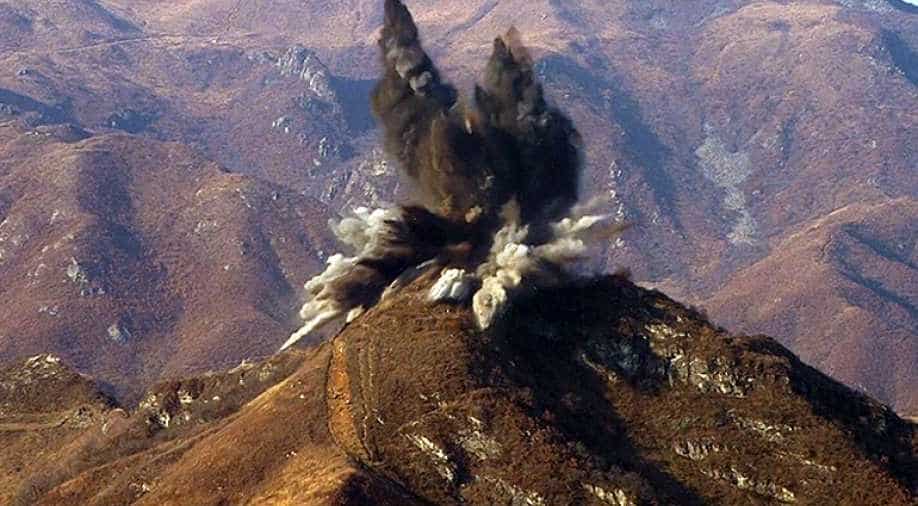 The move is one of the steps agreed during the Pyongyang summit between the South's President Moon Jae-in and the North's leader Kim Jong Un in Pyongyang in September.

Pyongyang blew up 10 guard posts in the Demilitarized Zone Tuesday as the two Koreas pursue a reconciliation drive, even while denuclearisation talks stall between the US and the North.

The move is one of the steps agreed during the Pyongyang summit between the South's President Moon Jae-in and the North's leader Kim Jong Un in Pyongyang in September.

The North told the South that it would blow up the 10 facilities almost simultaneously, Seoul's defence ministry said, adding that Southern soldiers "observed and confirmed the guard posts were completely ruined at the announced time".

Seoul has been tearing down 10 guard posts of its own, mostly using excavators, a defence ministry spokesman said.

The North has more of the facilities - which include both surface structures and underground elements - and according to Yonhap news agency the moves will leave it with around 150 in the area, with the South having about 50.

The dovish Moon has pursued a policy of engagement with its isolated, nuclear-armed neighbour, in increasing contrast to Washington, which insists pressure should be maintained on Pyongyang until it denuclearises.

Despite its name the area around the DMZ is one of the most fortified places on earth, replete with minefields and barbed-wire fences.

But under plans to ease tensions agreed in Pyongyang, the two Koreas are demilitarising the border truce village of Panmunjom, to leave it manned by 35 unarmed personnel from each side.

Officially called the Joint Security Area (JSA), the enclave is the only spot along the 250-kilometre (155-mile) frontier where soldiers from the two Koreas and the US-led UN Command stand face to face.