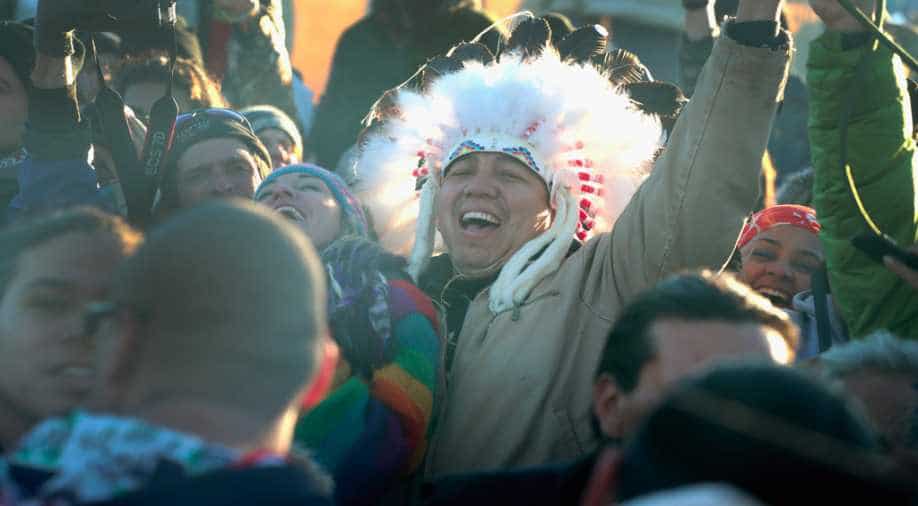 Native American and other activists celebrate on Sunday at Oceti Sakowin Camp after learning that easement for the Dakota Access Pipeline has been denied. Photograph:( Getty )

In a major breakthrough for Native Americans and environmentalists, the US Army Corps of Engineers on Sunday cancelled plans for a controversial oil pipeline crossing in North Dakota.

The pipeline was set to cross under the Missouri River and the man-made Lake Oahe, both of which are drinking water sources for the Standing Rock Sioux Tribe.

The conflict between the tribe and pipeline operators Energy Transfer Partners and Sunoco Logistics Partners got together North American native tribes, supporters and several environmentalists, who have camped in groups of thousands near the construction site for months in a bid to block it.

"It’s clear that there’s more work to do," Jo-Ellen Darcy, the US Army’s assistant secretary for civil works, said in a statement, news agency AFP reported.

"The best way to complete that work responsibly and expeditiously is to explore alternate routes for the pipeline crossing."

The Standing Rock Sioux had objected to building the 1,172-mile (1,886-kilometre) pipeline underneath the river and lake because of fear of possible leaks.

The tribe also said the pipeline would cross through areas with sacred historic artifacts, damaging them.

In the past few months, protests against the pipeline have been held in many parts of the country, with celebrities and politicians joining the cause.

"We wholeheartedly support the decision of the administration and commend with the utmost gratitude the courage it took on the part of President Obama, the Army Corps, the Department of Justice and the Department of the Interior to take steps to correct the course of history and to do the right thing," Standing Rock Sioux chairman Dave Archambault said in a statement, AFP reported.

"We are not opposed to energy independence, economic development, or national security concerns but we must ensure that these decisions are made with the considerations of our indigenous peoples."

Not all the protesters rejoiced. Some fear that the protest at this site was getting too powerful and high-profile, and that the pipeline will be built somewhere nearby where resistance isn't so strong.

The Iktce Wicháša Oyáte on the Army Corp diverting the #DAPL from Standing Rock (just before Trump takes power). pic.twitter.com/HE8nfQqAMi