'No vacancy' for Farage as ambassador: Britain turns down Trump's suggestion 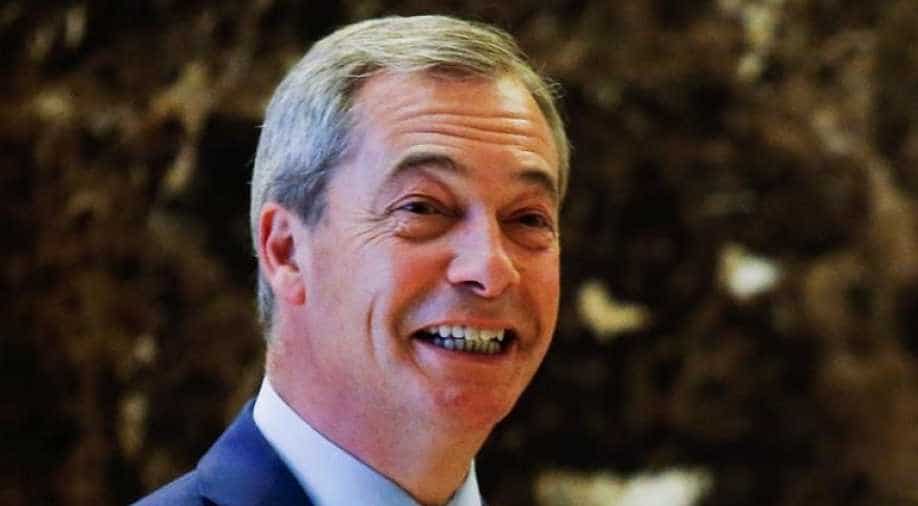 Britain on Tuesday dismissed US President-elect Donald Trump's unprecedented expression of support for Brexit campaigner Nigel Farage to be made British ambassador to Washington, saying pointedly that there is no vacancy for the job.

Trump, who after his election victory met Farage before any EU leaders, said on Twitter that "many people" would like to see the former metals trader turned politician as Britain's ambassador.

Many people would like to see @Nigel_Farage represent Great Britain as their Ambassador to the United States. He would do a great job!

Prime Minister Theresa May, who congratulated Trump on his victory, was swift to reject such an undiplomatic proposal, with a spokesman saying Britain already had an excellent ambassador to Washington and that London would appoint its own envoys.

"We have first rate ambassador in Washington," Foreign Secretary Boris Johnson, who campaigned for Brexit, told the British parliament. "There is no vacancy for that position."

It is highly unusual in the modern era for leaders to publicly suggest to foreign nations whom they would like to see as ambassador, though during strained relations they sometimes reject or expel envoys.

Trump`s suggestion provoked anger, support and even hilarity in Britain, with one lawmaker, Conservative Simon Burns, joking that perhaps Britain should suggest Hillary Clinton as its preferred choice as ambassador to London.

But the apparent public suggestion about who to appoint as ambassador by the man who will lead Britain's most powerful ally puts Prime Minister May in a difficult position just as she tries to build ties with Washington ahead of leaving the EU.

London is trying to gauge whether Trump would support a special trade deal with Britain as it negotiates a divorce from the EU. Britain also places great store on what it calls its "special relationship" with the United States.

"Mind your own business"

Farage, who spent decades campaigning for Britain to leave the European Union and helped force former Prime Minister David Cameron to call the June referendum that brought the Brexit vote, spoke at a Trump rally during the U.S. campaign and visited the president-elect after his victory.

As leader of the UK Independence Party (UKIP) and one of the key figures of the successful Brexit campaign, Farage has repeatedly angered EU leaders by predicting the collapse of the EU, which he says is run by an out-of-touch elite of "idiots".

Farage said Trump`s suggestion that he serve as ambassador had come "like a bolt from the blue" but Trump understood loyalty in a way that those in the "cesspit" of career politics did not.

"I am in a good position with the President-elect’s support to help. The world has changed and it`s time that Downing Street did too," Farage said in an article written for the Breitbart news website.

"I would do anything to help our national interest and to help cement ties with the incoming Anglophile administration," Farage said.

A photograph of Trump greeting Farage in front of a gilded elevator shortly after the US election caused consternation in EU capitals, many of whom view Trump with a mixture of fear and puzzlement.

His suggestion of Farage also provoked anger among some British lawmakers.

"Many people think you should mind your own business and talk about pussy-grabbing less, but hey, life is a constant disappointment," Jess Phillips, a lawmaker for the opposition Labour Party, said on Twitter in a reference to Trump`s previous vulgar comments about groping women.

Accused by his critics of being a racist and a bigot, Farage peppers his speeches with jokes and the odd expletive while railing against what he calls the doomed European superstate and immigration into Britain.

He is a member of the European parliament but has failed in his efforts to win election to the British parliament.

Farage said Trump would be a great president after "the political revolution" that brought Brexit in Britain and Trump to power in the United States.

"In the United Kingdom the people have spoken but the players at the top have, I am afraid, stayed the same," Farage, 52, said.

"Those who supported Remain now hold senior positions. Worst still, those who were openly abusive about Trump now pretend to be his friend," said Farage.

Farage has urged May to build ties with Trump, who provoked criticism in Britain with his call for a temporary ban on Muslims entering the United States. Queen Elizabeth might invite Trump for a state visit to Britain next year.

Farage made light of allegations of sexual assault against Trump during the US campaign by encouraging him to "come and schmooze" May but adding "don't touch her for goodness sake".

When US President Barack Obama said before the referendum that Britain would be at the back of the queue for a trade deal, Farage said it was disgraceful to intervene in the sovereign affairs of Britain.

In a radio interview after the US election, Farage described the US president as: "That Obama creature – a loathsome individual who couldn`t stand our country."

The way ambassadors are chosen in the United States and Europe differ significantly.

It is common practice for the United States to appoint celebrities or campaign donors as envoys, for example when Richard Nixon appointed Shirley Temple as his envoy to Ghana in 1974.

Kim Darroch, the current British ambassador in Washington, did not reply to emails from Reuters requesting comment on Trump`s remarks. His email bounced back with an out of office reply saying that the ambassador was travelling.