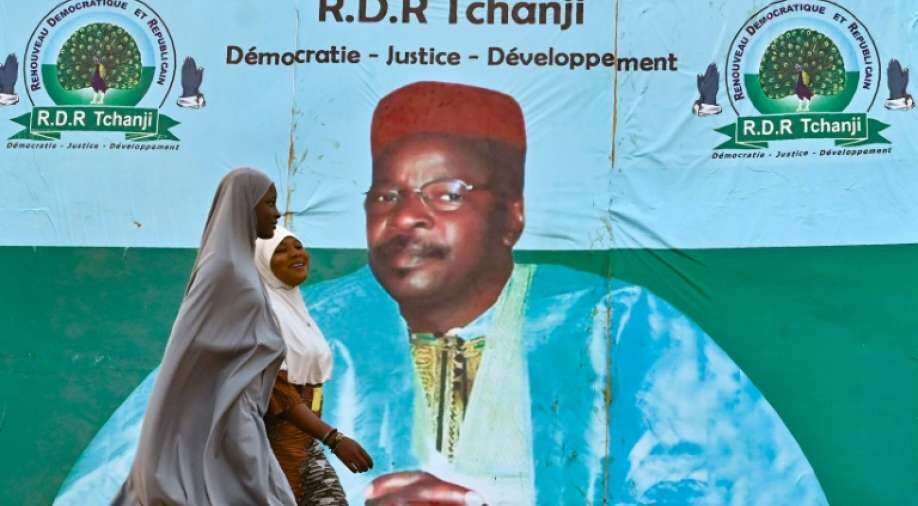 The world's poorest nation according to the UN's development benchmark covering 189 countries, Niger is also struggling with jihadist insurgencies that have spilled over from Mali and Nigeria.

Niger voted Sunday in a presidential run-off between two political heavyweights that is set to bring about the first democratic transition of power in the coup-prone country's history.

The world's poorest nation according to the UN's development benchmark covering 189 countries, Niger is also struggling with jihadist insurgencies that have spilled over from Mali and Nigeria.

Only 7.4 million of the country's 22 million population are eligible to vote on Sunday -- the rest are under-age.

Thousands of soldiers are deployed nationwide for the vote, which is on track to usher in a peaceful handover between elected presidents, its first since independence from France in 1960.

Outgoing President Mahamadou Issoufou's decision to voluntarily step down after two five-year terms was welcomed in a region where many leaders have tried to cling on to power.

His successor will either be his right-hand man and anointed successor Mohamed Bazoum or Mahamane Ousmane, who became the country's first democratically- elected president in 1993, only to be toppled in a coup three years later.

Ousmane, 71, is running for president for the fifth time since his ouster.

Both candidates are stalwarts of Niger's political scene.

One voter, 29-year-old student Idrissa Gado, said the election is a "source of pride" for Nigeriens.

"The next president must act against the rebels, it's the great concern in Niger that must be dealt with, we want peace and security," said as he cast his ballot in Niamey.

Whoever wins, 42-year-old tile-layer Ibrahim Kadi Mahmane said he hoped the new leader "doesn't forget the poor and the people living in villages".

Winning votes alone has not always led to power in Niger -- there have been four military coups and six elections since independence.

But political alliances will loom large on Sunday, when Bazoum will be the strong favourite after winning 39.3 percent of the first round vote on December 27.

"I hope that luck will be with the winner... I have many reasons to believe it's indeed on my side," Bazoum said as he voted in the capital Niamey.

The 60-year-old former interior minister has already sealed the support of the candidates who came third and fourth in the first round.

"Bazoum has a coalition that is expected to win if the voting instructions of the parties which support him are respected by their activists," said Ibrahim Yahya Ibrahim of the International Crisis Group think-tank.

But, he cautioned, it was "very far from being won".

Ousmane took nearly 17 percent in the first round.

He can count on the support of a coalition of 18 opposition parties called Cap 20-21 as well as Hama Amadou, who had previously been thought to be the most formidable candidate against Bazoum.

Amadou was ruled out from running due to a prison sentence for baby trafficking which he has slammed as politically motivated.

The opposition filed an unsuccessful appeal against the result of the first round, claiming fraud, but has since given up its boycott of the CENI independent electoral commission.

A diplomatic source, speaking on condition of anonymity, said the concern was not so much "unfair practices" but the ruling party's imposing electoral machine.

The elections "aren't perfect, at least they are elections", the source said.

CENI nevertheless warned Sunday that "fake ballot papers" had been distributed in some parts of the country.

Bazoum has campaigned on continuity with the previous regime, which has promised development in a country struggling with the highest birthrate in the world -- an average of seven children per woman.

An immense security challenge also awaits whoever emerges as victor.

A brutal jihadist insurgency is intensifying in the country's west, while Islamist militants from the Nigerian movement Boko Haram wage incessant attacks in the southeast.

Like its Sahel neighbours Mali and Burkina Faso, Niger is increasingly struggling to cope.

Hundreds of troops have been killed and hundreds of thousands of people have fled their homes.

People who have been vaccinated can meet other vaccinated people without masks: CDC