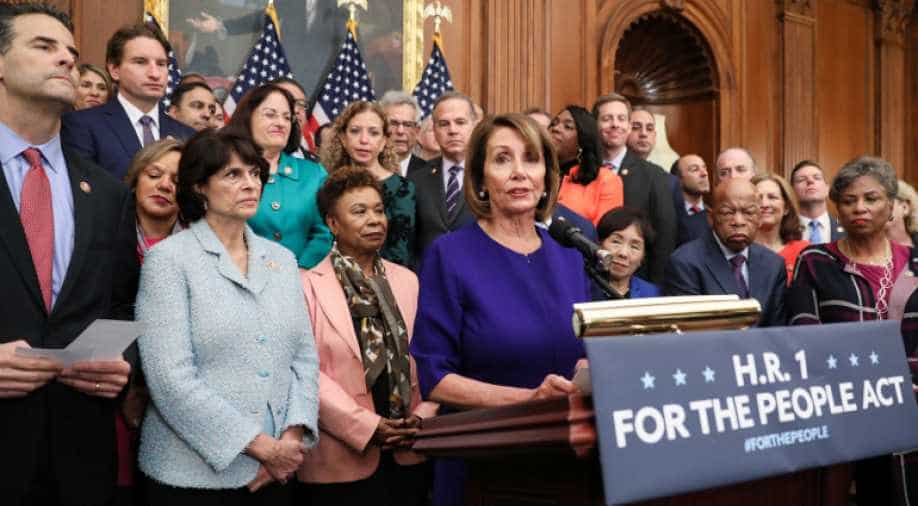 Democratic leaders began their new era of control with caution, reflecting their persistent concern that acting too quickly to press investigations of Trump`s ties with Russia or his personal tax records may be perceived as overreach and cause a backlash in the next election cycle.

The new Democratic majority in the US House of Representatives is quietly planning behind the scenes for a series of investigations of Republican President Donald Trump, but no immediate flurry of subpoenas materialized as some Democrats had hoped.

Democratic leaders began their new era of control with caution, reflecting their persistent concern that acting too quickly to press investigations of Trump`s ties with Russia or his personal tax records may be perceived as overreach and cause a backlash in the next election cycle.

House Speaker Nancy Pelosi rolled out legislative proposals on Friday, including one to require presidential candidates to disclose publicly 10 years worth of tax returns, a direct response to Trump`s refusal to release his.

Such caution contrasted with urgent demands from newer members of the House Democratic caucus, which took majority control on Thursday, for tough, swift action.

Representative Rashida Tlaib was filmed late on Thursday at a reception saying that Democrats were going to try to remove Trump from office, telling the crowd, "We`re going to impeach that motherfucker."

Her remark drew rebukes from Republicans and Democrats.

House Republican Whip Steve Scalise said: "Pelosi`s got her first test and it happened on day one. How is she going to stand up to the most radical left elements of her party when they become unhinged?"

During a White House news conference, Trump said Tlaib`s comment was a "dishonor to herself and to her family." Trump had earlier tweeted that Democrats were discussing impeachment because they feared running against him in the 2020 election, when he will seek a second four-year term.

"Everybody has got their own style, it ain't mine," House Majority Whip James Clyburn told reporters, referring to Tlaib. "I don`t believe we ought to be talking about impeachment until we get this country back on track."

Tlaib defended her comments in an interview with a Detroit television station on Friday. "It`s probably exactly how my grandmother, if she was alive, would say it," she told NBC-affiliate WDIV.

"I stand by impeaching the president of the United States," Tlaib said. "I ran on that."

Whether or not impeachment proceedings follow, Democrats have been firm that they will closely scrutinize Trump, his business interests and the first two years of his presidency.

Trump`s time in the White House so far has been clouded by a US special counsel`s inquiry into Russian interference in the 2016 US election and possible coordination between Moscow officials and the Trump campaign.

Democrats also charge that several of Trump`s top aides and cabinet officials have violated legal and ethical standards - a subject they believe is ripe for investigation.

"President Trump set the tone from the top of his administration that behaving ethically and complying the law is optional, ladies and gentleman, I stopped by here to say we`re better than that. It will not be optional," Oversight Committee Chairman Elijah Cummings told a room of cheering staffers, offering a hint of what could be to come.

Adam Schiff, the new chairman of the House Intelligence Committee circulated a memo in early 2018 that is now seen as a blueprint for the Democrats` investigative agenda.

Documents about Trump deals and finances from Deutsche Bank, should be obtained "via subpoena if necessary," the memo said.