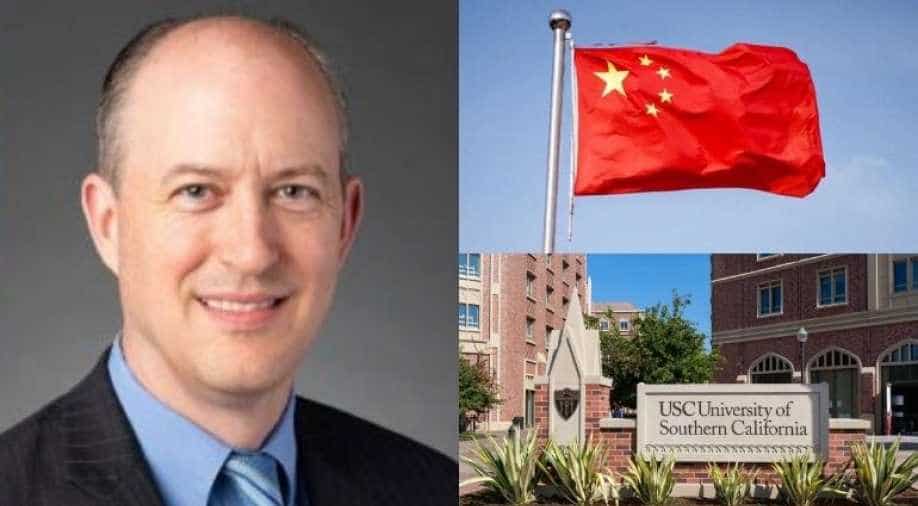 Professor Greg Patton at the University of Southern California and the Chinese flag Photograph:( Agencies )

News of the spat reached China, where many posted on social media saying they thought Professor Patton's punishment, conversely, was discrimination against speakers of the Chinese language.

The suspension of a US university professor has ignited a debate over the use of a seemingly innocuous Chinese word.

While communicating with his students during a lecture, Professor Greg Patton at the University of Southern California (USC) said "in China, the common pause word is 'that, that, that'. So in China, it might be na-ge, na-ge, na-ge."

In Chinese, the word "na-ge" (那个) is a common filler phrase that people use when they're hesitating or trying to find the right word. It literally translates to the word "that".

I cannot believe this is real, but it is.

This USC Professor is on leave after students were offended that a Chinese word he used during a lecture on foreign languages sounded like an english racial slur.

Watch the video for yourself: pic.twitter.com/HkFPMEP5I2

Annunciated, na-ge sounds like the n-word, which led several of the professor's students to complain to the university. Responding to the complaint, the dean of the university, Geoffrey Garrett, told students that Prof Patton would no longer be teaching the course.

"It is simply unacceptable for the faculty to use words in class that can marginalise, hurt and harm the psychological safety of our students," he said.

However, the word's usage has a wholly different history and language in a lecture on communication in international business.

News of the spat reached China, where many posted on social media saying they thought Professor Patton's punishment, conversely, was discrimination against speakers of the Chinese language.

Also read: 'There will be no extension': Trump says on TikTok deadline

There have been many documented incidents of the word being used innocuously and leading to misunderstandings, and even violence.

In July 2016, a fight broke out on the subway in the city of southern Guangzhou, after a black man heard a Chinese man saying na-ge and mistook it for the n-word.

More recently, in April this year, Taiwanese news website UDN reported that two men nearly came to blows on the island outside a restaurant over the same misunderstanding.

Even Chinese basketball star Yao Ming has spoken of how the word brought him "some trouble" while playing in the US for the National Basketball Association (NBA).