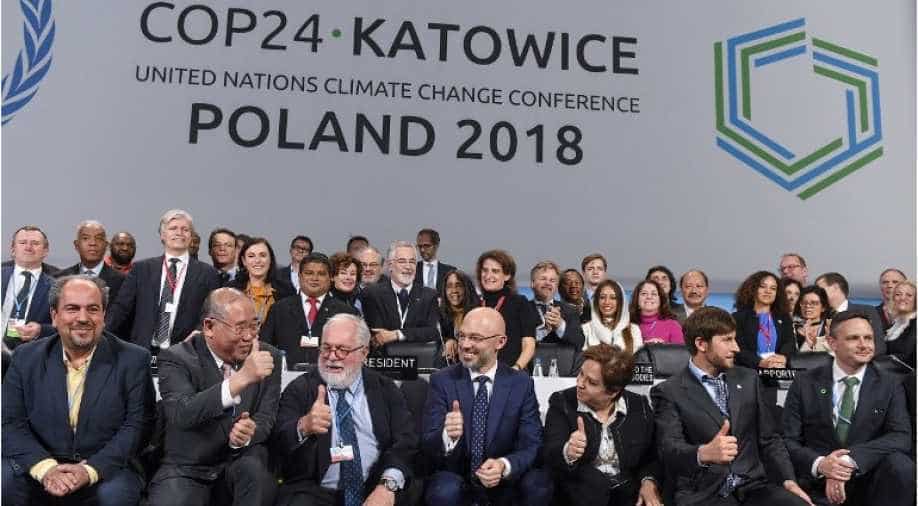 Heads of the delegations react at the end of the final session of the COP24 summit on climate change in Katowice, southern Poland. Photograph:( AFP )

Nations on Sunday struck a deal to breathe life into the landmark 2015 Paris climate treaty after marathon UN talks that failed to match the ambition the world's most vulnerable countries need to avert dangerous global warming.

"Putting together the Paris agreement work programme is a big responsibility," said COP24 president Michal Kurtyka as he gavelled through the deal after talks in Poland that ran deep into overtime.

"It has been a long road. We did our best to leave no one behind."

(COP24 president Michal Kurtyka jumps at the end of the final session of the COP24 summit.)

But states already dealing with devastating floods, droughts and extreme weather made worse by climate change said the package agreed in the mining city of Katowice lacked the bold ambition to cut emissions the world needed.

The executive director of Greenpeace Jennifer Morgan said: "We continue to witness an irresponsible divide between the vulnerable island states and impoverished countries pitted against those who would block climate action or who are immorally failing to act fast enough."

The final decision text was repeatedly delayed as negotiators sought guidelines that could ward off the worst threats posed by our heating planet while protecting the economies of rich and poor nations alike.

"Without a clear rulebook, we won't see how countries are tracking, whether they are actually doing what they say they are doing," Canada's Environment Minister Catherine McKenna told AFP.

At their heart, negotiations were about how each nation funds action to mitigate and adapt to climate change, as well as how those actions are reported.

Developing nations wanted more clarity from richer ones over how the future climate fight will be funded and pushed for so-called "loss and damage" measures.

This would see richer countries giving money now to help deal with the effects of climate change many vulnerable states are already experiencing.

Another contentious issue was the integrity of carbon markets, looking ahead to the day when the patchwork of distinct exchanges -- in China, the Europe Union, parts of the United States -- may be joined up in a global system.

The Paris Agreement calls for setting up a mechanism to guard against practices, such as double counting emissions savings, that could undermine such a market.

A major sticking point, delegates eventually agreed Saturday to kick the issue down the road until next year.

One veteran observer told AFP Poland's presidency at COP24 had left many countries out of the process and presented at-risk nations with a "take it or leave it" deal.

One of the largest disappointments for countries of all wealths and sizes was the lack of ambition to reduce emissions shown in the final COP24 text.

Most nations wanted the findings of the Intergovernmental Panel on Climate Change (IPCC) to form a key part of future planning.

'The system must change'

It highlighted the need to slash carbon pollution by nearly half before 2030 in order to hit the 1.5C target.

But the US, Saudi Arabia, Russia and Kuwait objected, leading to watered-down wording.

The final statement from the Polish COP24 presidency welcomed "the timely conclusion" of the report and invited "parties to make use of it" -- hardly the ringing endorsement many nations had called for.

"There's been a shocking lack of response to the 1.5 report," Greenpeace's Morgan, told AFP. "You can't come together and say you can't do more!"

UN Secretary-General Antonio Guterres, who made three trips to Katowice over the course of the talks, said the world's climate fight was just beginning.

With the political climate process well into its third decade sputtering on as emissions rise remorselessly, activists have stepped up grassroots campaigns of civil disobedience to speed up action.

"We are not a one-off protest, we are a rebellion," a spokesman for the Extinction Rebellion movement, which disrupted at least one ministerial event at the COP, told AFP.

"We are organising for repeated disruption, and we are targeting our governments, calling for the system change needed to deal with the crisis that we are facing."