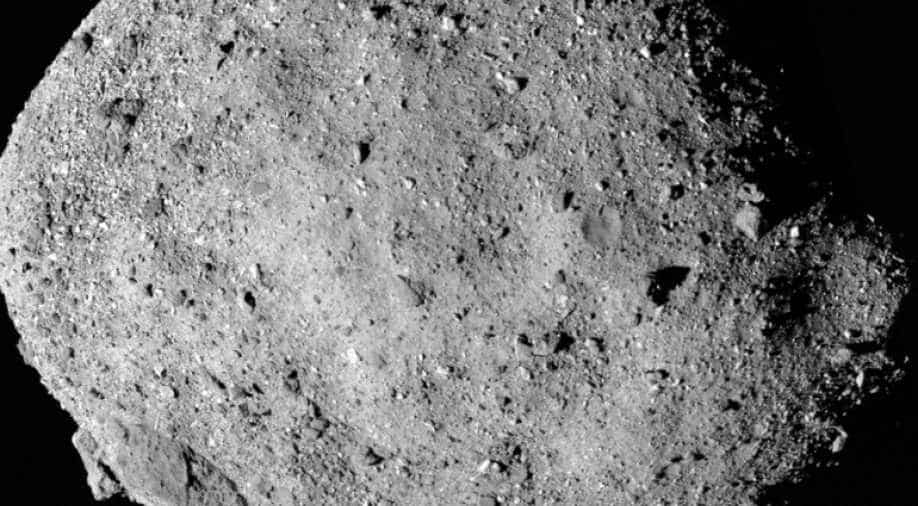 This mosaic image of asteroid Bennu, composed of 12 PolyCam images was collected on December 2, 2018 by the OSIRIS-REx spacecraft from a range of 15 miles (24 km).  Photograph:( Reuters )

The spacecraft will circle the asteroid Bennu about 1.75 kilometres from its centre, closer than any other spacecraft has come to its celestial object of study.

NASA's OSIRIS-REx spacecraft broke a record after successfully entering into orbit around the asteroid Bennu — the smallest cosmic object ever to be orbited by a spacecraft.

While many on Earth prepared to welcome the New Year, NASA's OSIRIS-REx spacecraft, 110 million kilometres away, carried out a single, eight-second burn of its thrusters, NASA said in a statement.

The manoeuvre placed the spacecraft into orbit around the asteroid Bennu.

"The team continued our long string of successes by executing the orbit-insertion manoeuvre perfectly," said Dante Lauretta, OSIRIS-REx principal investigator at the University of Arizona in the US.

"With the navigation campaign coming to an end, we are looking forward to the scientific mapping and sample site selection phase of the mission," said Lauretta.

"Entering orbit around Bennu is an amazing accomplishment that our team has been planning for years," he said.

Inching around the asteroid at a snail's pace, OSIRIS-REx's first orbit marks a leap for humankind. Never before has a spacecraft from Earth circled so close to such a small space object — one with barely enough gravity to keep a vehicle in a stable orbit.

"The gravity of Bennu is so small, forces like solar radiation and thermal pressure from Bennu's surface become much more relevant and can push the spacecraft around in its orbit much more than if it were orbiting around Earth or Mars, where gravity is by far the most dominant force," said Dan Wibben, OSIRIS-REx Maneuver and Trajectory Design Lead.

The spacecraft will circle Bennu about 1.75 kilometres from its centre, closer than any other spacecraft has come to its celestial object of study.

Previously the closest orbit of a planetary body was in May 2016, when the Rosetta spacecraft orbited about seven kilometres from the centre of the comet 67P/Churyumov-Gerasimenko.

The comfortable distance is necessary to keep the spacecraft locked to Bennu, which has a gravity force only 5-millionths as strong as Earth's. The spacecraft is scheduled to orbit Bennu through mid-February at a leisurely 62 hours per orbit.

Now that the OSIRIS-REx spacecraft is closer to Bennu, physical details about the asteroid will leap into sharper focus, and the spacecraft's tour of this rubble pile of primordial debris will become increasingly detailed and focused.

"Our orbit design is highly dependent on Bennu's physical properties, such as its mass and gravity field, which we didn't know before we arrived," said OSIRIS-REx's flight dynamics system manager Mike Moreau, who is based at NASA's Goddard Space Flight Center in the US.

"Up until now, we had to account for a wide variety of possible scenarios in our computer simulations to make sure we could safely navigate the spacecraft so close to Bennu. As the team learned more about the asteroid, we incorporated new information to hone in on the final orbit design," he said.

The simulations have played a critical role. The OSIRIS-REx mission, after all, was designed based on complex computer programs that predicted the properties of Bennu and how the spacecraft's trajectory would behave.

This diligent preparation allowed the team to navigate the vehicle safely to Bennu in December and put some questions to rest and to fly over its poles and equator in a preliminary survey that led to some surprises.

The OSIRIS-REx team will resume science operations in late February. At that point, the spacecraft will perform a series of close flybys of Bennu for several months to take high-resolution images of every square inch of the asteroid to help select a sampling site.

During the summer of 2020, the spacecraft will briefly touch the surface of Bennu to retrieve a sample. The OSIRIS-REx mission is scheduled to deliver the sample to Earth in September 2023.