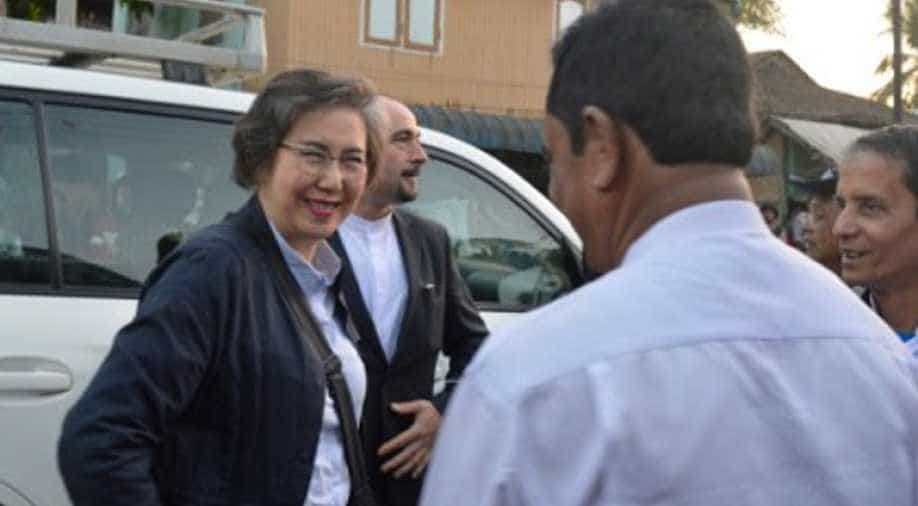 The UN's rights envoy for Myanmar arrived in troubled Rakhine state on Friday for a trip north to probe allegations of horrific abuse of Rohingya Muslims by security forces.

Special rapporteur on Myanmar Yanghee Lee touched down in the state capital Sittwe as part of a 12-day visit to investigate escalating violence in Myanmar's restive ethnic border areas.

Lee has faced threats and been branded a "whore" by Buddhist hardliners on previous visits for her criticism of how Myanmar treats the Rohingya, a stateless group that has suffered years of poverty and repression.

Over the past three months they have been targeted by a military crackdown in northern Rakhine that the UN said has forced at least 65,000 to flee across the border to Bangladesh.

In Sittwe, Lee met with senior local officials and then visited the only Muslim neighbourhood left in the city since sectarian clashes in 2012 drove tens of thousands of Rohingya into displacement camps.

"We told her that nothing has changed for us," a local Muslim called Zaw Zaw told AFP.

"We want our children to learn in schools peacefully and we want jobs like we had before."

Earlier a senior figure from the nationalist Arakan National Party, which controls the state parliament and aggressively opposes any moves to grant the Rohingya citizenship, said they had refused to meet with Lee.

"They offered to meet with us from their side but we have no plans to meet them," ANP's vice-president Khine Pyi Soe told AFP.

Villages in northern Rakhine have been under military control since October as the army stages "clearance operations" to find Rohingya insurgents allegedly behind deadly raids on police border posts.

The crisis has drawn a storm of international criticism for the elected government of Aung San Suu Kyi, which took power in March.

Lee has slammed the lockdown as "unacceptable" and called for an international investigation into claims troops have raped, murdered and tortured civilians from the Muslim minority.

Ahead of her trip, she said violence in Rakhine had contributed to "disquiet regarding the direction that the new government is taking in its first year".

Muslim-majority Malaysia has lashed out at Nobel laureate Suu Kyi for not stopping the violence, and next week will host foreign ministers from the Organisation of Islamic Cooperation for talks on the crisis.

Bangladesh has urged Myanmar's government to take back the thousands of refugees that have entered already overcrowded camps along the border.

"Bangladesh has demanded (the) quick restoration of (a) normal situation in Rakhine state so that Myanmar nationals... can quickly go back home," foreign minister A.H. Mahmood Ali said after meeting Myanmar's special envoy in Dhaka this week.

Myanmar's foreign ministry said the two sides had "agreed to commence consultations for verification and repatriation" of those who had fled the lockdown.