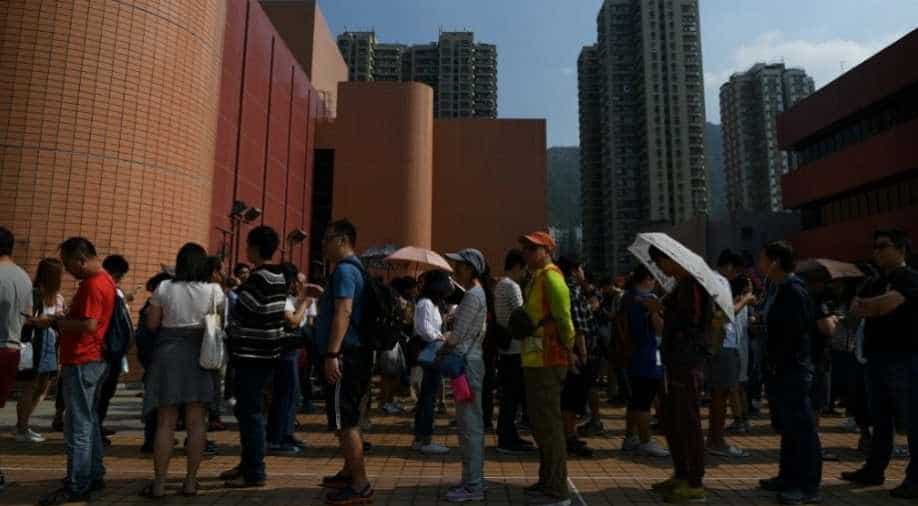 People queue to cast their vote during the district council elections in Tuen Mun district of Hong Kong. Photograph:( AFP )

The turnout in the first four hours matched a figure only reached at 6.30 pm in the last election four years ago, government data showed, as concern grew in the city of 7.4 million that polling could be halted if violence erupts.

The turnout in the first four hours matched a figure only reached at 6.30 pm in the last election four years ago, government data showed, as concern grew in the city of 7.4 million that polling could be halted if violence erupts.

Reuters witnesses said there was only a small police presence as voting began, in contrast to reports that riot police planned to guard all polling stations and almost the entire force of 31,000 would be on duty.

"Some people are afraid the elections will be stopped by unpredictable reasons — maybe some protests," said Kevin Lai, a 45-year-old IT worker, adding that he had come to vote early in a bid to escape any disruptions later.

A record 1,104 candidates are vying for 452 seats and a record 4.1 million people in the Chinese-ruled city have enrolled to vote for district councillors who control some spending and decide issues such as recycling and public health.

If the pro-democracy campaigners gain control, they could secure six seats on Hong Kong's Legislative Council or parliament, and 117 seats on the 1,200-member panel that selects its chief executive.

Beijing-backed Lam cast her ballot in front of television cameras and pledged that her government, widely seen as out of touch with the population, would listen "more intensively" to the views of district councils.

She also expressed hope that a rare lull in violence over the past few days would endure.

"I hope this kind of stability and calm is not only for today's election, but to show that everyone does not want Hong Kong to fall into a chaotic situation again, hoping to get out of this dilemma and let us have a fresh start," Lam said.

The anti-China protests have at times forced the closure of government, businesses and schools in the city's worst political crisis in decades, as police used tear gas, rubber bullets and water cannon in response to petrol bombs and bows and arrows.

Restaurant manager Jeremy Chan saw the elections in the Asian financial hub as offering protest opponents a chance to share their opinions without fear.

"They believe they are fighting for democracy, fighting for Hong Kong, but the rioters only listen to what they want to hear," said the 55-year-old, citing vandalism of businesses seen as pro-Beijing. "Freedom of speech is lost."

The protests started over a now-withdrawn extradition bill that would have allowed people to be sent to mainland China for trial but rapidly evolved into calls for full democracy.

The unrest now poses the biggest popular challenge to Chinese President Xi Jinping since he came to power in 2012.

Sunday was the seventh day of a stand-off at Polytechnic University, its campus surrounded by police as some protesters hid out on the sprawling grounds roamed by first-aid workers.

Demonstrators are angry at what they see as Chinese meddling in the freedoms promised to the former British colony when it returned to Chinese rule in 1997. They say they are also responding to excessive use of force by police.

China says it is committed to the "one country, two systems" formula for the autonomy of Hong Kong, where police deny accusations of brutality and say they have shown restraint.

Brutal attacks on election candidates have thrust Hong Kong's lowest tier of governance into the world spotlight as the government struggles to rein in protests.

"I'm so proud to see so many people out here," said bank dealing manager Wong, 32, as he waited to vote in Yuen Long, near the Chinese border. "I hate the government so much. July 21 is four months ago, but there is so much anger here."

He was referring to an attack that day by suspected triad gangsters on anti-government protesters and commuters at a nearby railway station.

Young pro-democracy activists are now battling in some seats that were once uncontested and dominated by pro-Beijing candidates.

But Joshua Wong, one of the most prominent activists, whom authorities barred from running, on Sunday urged people to vote to show "our discontent with Beijing".

Jimmy Sham, a candidate of the Civil Human Rights Front, which organised some of the mass anti-government rallies of recent months, was beaten by men with hammers in October.

"We can see Hongkongers are longing for a chance to express their stand," said Sham. "We don’t know yet, at the end of the day, if the democrats can win a majority. But I hope our Hong Kong citizens can vote for the future of Hong Kong."