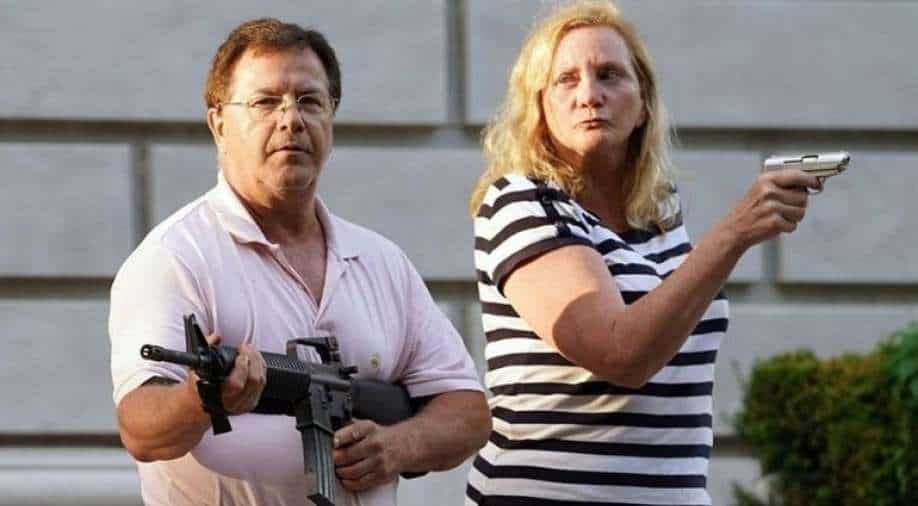 A couple draws their firearms on protestors as they enter their neighbourhood during a protest against St. Louis Mayor Lyda Krewson, in St. Louis, Missouri, US, in this picture obtained from social media Photograph:( Reuters )

In addition to the McCloskeys, who are personal injury lawyers, the Republican governor also pardoned 10 other people on Friday, a document from his office showed.

The McCloskeys, both lawyers in their 60s, said they felt threatened by the protesters, who were passing their home in June 2020 on their way to demonstrate in front of the mayor’s house nearby in one of hundreds of similar demonstrations around the country after the killing of George Floyd, a Black man, by a white Minneapolis police officer.

The couple also said the group was trespassing on a private street.

Mark McCloskey emerged from his home with an AR-15-style rifle, and Patricia McCloskey waved a semiautomatic pistol, according to the indictment. Photos and cellphone video captured the confrontation, which drew widespread attention and made the couple heroes to some and villains to others.

A St. Louis grand jury indicted the couple on felony unlawful use of a weapon and tampering charges four months after the incident.

Because the charges were misdemeanors, the McCloskeys did not face the possibility of losing their law licenses or their rights to own firearms.

Last July, then-President Donald Trump, a Republican, said charging the couple was an abuse of power.

In a live broadcast, the McCloskeys spoke from their home at the Republican National Convention in August. Mark McCloskey announced last month he was running for a US Senate seat in Missouri as a Republican.