Merkel visits Trump without illusions, but with hope 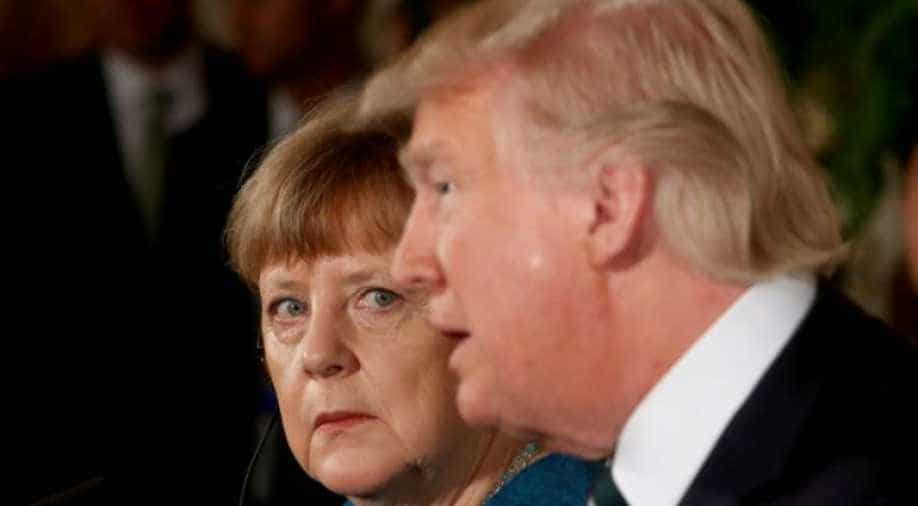 Germany's Angela Merkel visits U.S. President Donald Trump on Friday with no illusions of matching his "special relationship" with France's Emmanuel Macron, but hoping to foster a broader dialogue on trade - one of a batch of tricky topics likely to be addressed.

The cautious Merkel has failed to establish a good personal rapport with the brash Trump, and the mood music of her one-day working visit to the White House will almost certainly contrast sharply with the tactile "bromance" between Trump and Macron.

Yet her trip may prove more productive. Before heading home after a three-day state visit in Washington, Macron acknowledged that, despite his efforts to dissuade Trump from pulling out of the multinational Iran nuclear deal, he remained likely to do so.

The Iran deal, looming U.S. tariffs on European steel and aluminium products, a planned Russian gas pipeline running under the Baltic Sea to Germany, and Berlin's military spending are issues that divide Merkel and Trump and likely to come up at their working lunch.

"The chancellor is pleased about this appointment because she is a convinced Atlanticist," a senior German official said. "It is important to cultivate this relationship."

In Washington, a White House official described Germany as one of the United States' closest partners and a steadfast NATO ally, adding: "All of Washington is ready to work with Chancellor Merkel's new government."

Ahead of the trip, German officials said they expected U.S. tariffs on European steel and aluminium products to kick in on May 1, when an exemption expires. But they said Germany would try to negotiate a broad package including other industries.

"I think the chancellor would prefer a broad dialogue with the Americans. The government is open to extending the package to other duties and trade barriers," one official added.

In Washington, a White House official said the United States would press Germany about trade deficits that "pose risks to global economic stability", and "would like to remove barriers ... to trade so that we can level the playing field".

"We want to work with Berlin on global unfair trading practices because those are impacting our economies in equal measure," he said.

The White House official said Trump would press Merkel to increase Germany's funding for NATO, a subject he has pushed since taking office.

"We will ask Germany to step up on burden-sharing," the official said, adding that NATO needed to be strong and prepared to address a host of major foreign policy issues including Syria, Iran, China and Russia.

In Berlin, the German officials made clear that Merkel was not ready to roll over when faced with Trump's criticism of Germany's trade position or the planned Nord Stream 2 pipeline.

"Our analysis is ... that (the pipeline) does not make us more dependent on Russia," one of the officials said.

EU countries are divided on the merits of Nord Stream 2. Trump could seize on this, as well as Germany's slow progress in moving closer to the NATO defence spending target.

On Iran, Macron made the running ahead of Merkel's visit.

On Wednesday, he called on the United States not to abandon the Iran deal as Western envoys said Britain, France and Germany were nearing agreeing a package they hope could persuade Trump to save the pact. This gives Merkel something to work with.

"How harshly the whole thing will unfold might depend on to what extent Merkel can steer the conversation in the direction of trade and Iran," Jan Techau, a director at The German Marshall Fund of the United States.

"Those are the fields in which her position is stronger because the Europeans are united and Macron has done the prep work."