Merkel could join Macron in Davos for epic clash with Trump 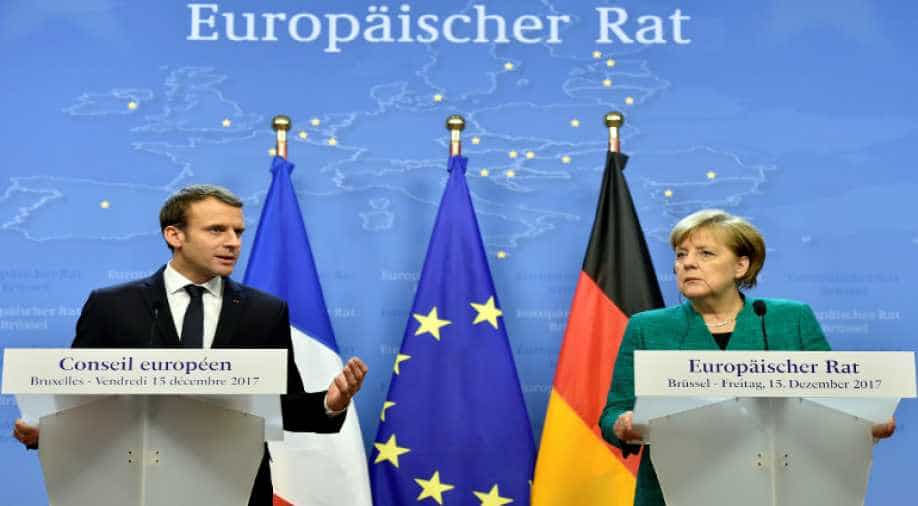 Officials at the WEF said they believed Merkel was still considering whether to attend. If she does, it is unlikely that she or Macron would overlap with Trump, who is expected to arrive on the afternoon of Jan. 25. Photograph:( Reuters )

German Chancellor Angela Merkel is considering joining French President Emmanuel Macron at the World Economic Forum in Davos next week in what could turn into an epic clash of competing world views with U.S. President Donald Trump.

Merkel, who has been struggling to put together a government since a German election in September, had been expected to skip the annual gathering of leaders, CEOs, bankers and celebrities in the Swiss Alps for a third straight year.

But after clinching a preliminary coalition agreement with the centre-left Social Democrats (SPD) on Friday, German officials said Merkel could travel to Davos after all, possibly setting up a major confrontation with Trump, who is expected to speak on the final day of the forum.

An appearance would signal Merkel's return to the world stage after months of political limbo in which she has avoided the limelight and been dismissed by some in the German and international media as a spent force.

It would also allow her and Macron, who is scheduled to speak at the forum on Jan. 24, two days before Trump, to reaffirm their commitment to reforming the European Union after Britain's decision to leave, and to defend liberal democratic values in the face of Trump's "America First" policies.

Merkel's spokesman Steffen Seibert was coy last week when asked whether she might attend the WEF, which will run from Jan. 23-26 under the banner "Creating a Shared Future in a Fractured World" and will attract some 60 heads of state and government.

But after clinching a preliminary deal with the SPD, the chances that she could attend appear to have risen. German officials said no final decision had been taken and that Merkel may wait for the outcome of an SPD congress in Bonn next Sunday - where the party will formally decide whether to enter coalition talks with her conservatives - before committing.

Officials at the WEF said they believed Merkel was still considering whether to attend. If she does, it is unlikely that she or Macron would overlap with Trump, who is expected to arrive on the afternoon of Jan. 25.

This year's forum will be opened by Indian Prime Minister Narendra Modi on Jan. 23. Britain's Theresa May, Canada's Justin Trudeau and Israel's Benjamin Netanyahu are also expected, as well as celebrities such as actress Cate Blanchett and musician Elton John.

Last year's gathering took place in the week leading up to Trump's inauguration and was headlined by Chinese President Xi Jinping, who signalled his readiness to fill the vacuum in global leadership created by America's shift inward.

Since then, Trump has pulled the United States out of the Trans-Pacific Partnership, a free trade deal with Asian countries, announced a withdrawal from the Paris climate accord and threatened to torpedo an agreement between Western powers and Iran aimed at curbing its nuclear programme.

He has stirred fears of conflict with North Korea by engaging in an escalating war of words with its leader Kim Jong Un. Last week, he stirred international outrage by referring to Haiti and African nations as "shithole countries", according to members of Congress who attended a meeting in the White House.

On Saturday, some 500 demonstrators marched in the Swiss capital Bern to protest against Trump's plans to attend the WEF.

"There are very few things in the world that unite countries as much as their antipathy towards Trump and what he is doing," said Ian Bremmer, president of political risk consultancy Eurasia Group, and a regular at Davos.

"In the United States he may have 40 percent who approve of what he's doing. In the Davos crowd it is closer to 5 percent."

The visit by Trump will be the first by a U.S. president since Bill Clinton in 2000. He will be accompanied by a large delegation that is expected to include his son-in-law Jared Kushner, Treasury Secretary Steve Mnuchin and Secretary of State Rex Tillerson.

Merkel has had a frosty relationship with Trump, who accused her during his campaign for the presidency of "ruining Germany" by allowing hundreds of thousands of refugees, many fleeing war in the Middle East, into the country in 2015.

She was hailed in some Western media as the last defender of liberal democratic values after Trump's victory. Since then, the election of Macron, a pro-European centrist who, like Merkel, supports free trade and the global rules-based order, has given her a powerful ally in the confrontation with Trump.

Macron is slated to speak for 45 minutes in the evening of Jan. 24 in Davos, a ski resort in eastern Switzerland.

"My instinct tells me that Macron will go big," said Robin Niblett, director of the Chatham House think tank in London. "He won't just talk about Europe. He will try to take up the mantle of the free world under Europe's wing."

If he is joined by Merkel, who has made seven appearances at the WEF since becoming chancellor in 2005, that message may resonate even louder.