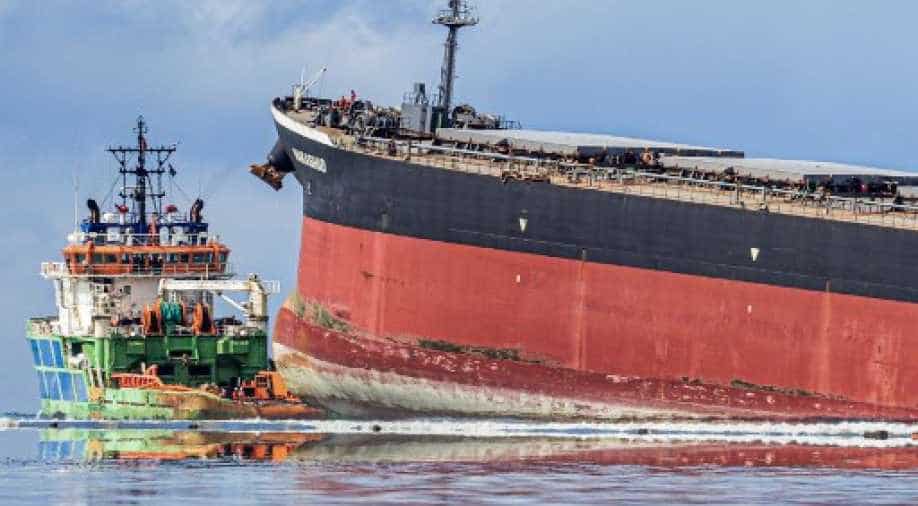 Rough seas have hampered efforts to stop fuel leaking from the bulk carrier MV Wakashio, which ran aground two weeks ago, and is staining pristine waters in an ecologically protected marine area off the south-east coast. Photograph:( AFP )

Coast guard vessels were being positioned near the vessel and the deployment of booms to absorb oil was 'strengthened' to prepare for the ship eventually breaking apart.

A ship that has leaked more than 1,000 tonnes of oil in pristine waters off the Mauritius coast appeared to be breaking apart Saturday.

Mauritius declared an environmental emergency last week, and salvage crews raced against the clock to pump the remaining 3,000 tonnes of oil off the ship.

As of Saturday about 90 tonnes of oil remained on board, much of it residue from the leakage.

Early Saturday morning the salvage team warned that the ship's condition "was worsening and it could break at any time", a crisis committee formed in response to the spill, said.

"Indeed, on the same day at around 4.30pm, a major detachment of the vessel's forward section was observed," it added.

Images taken Saturday showed the MK Wakashio close to splitting completely in half, though the two pieces were still partially attached.

Coast guard vessels were being positioned near the vessel and the deployment of booms to absorb oil was "strengthened" to prepare for the ship eventually breaking apart, the crisis committee statement said.

"Skimmers are on stand-by mode near the vessel and will intervene as and when required," it said, adding that weather was expected to "worsen over the coming days with waves reaching a maximum height of 4.5 metres".

The Mauritian government has come under fire,  including from opposition leaders, for doing too little in the week after the ship ran aground.

In a statement Friday night, the government said it would seek compensation from "the owner and the insurer" of the ship for "all losses and damages" caused by the spill as well as for costs related to the clean-up.

Japanese firm Nagashiki, the owner, has pledged to "sincerely" respond to requests for compensation over damage to the marine environment.

France and Japan have responded to Mauritius' call for help with clean-up operations.

So far more than 800 tonnes of oil liquid waste and more than 300 tonnes of solid waste sludge and debris has been removed from the ocean.

Thousands of Mauritians have volunteered day and night to clean the powder-blue waters that have long been a favourite among honeymooners and tourists.

The spill is both an ecological and economic disaster for Mauritius, which relies heavily on tourism.