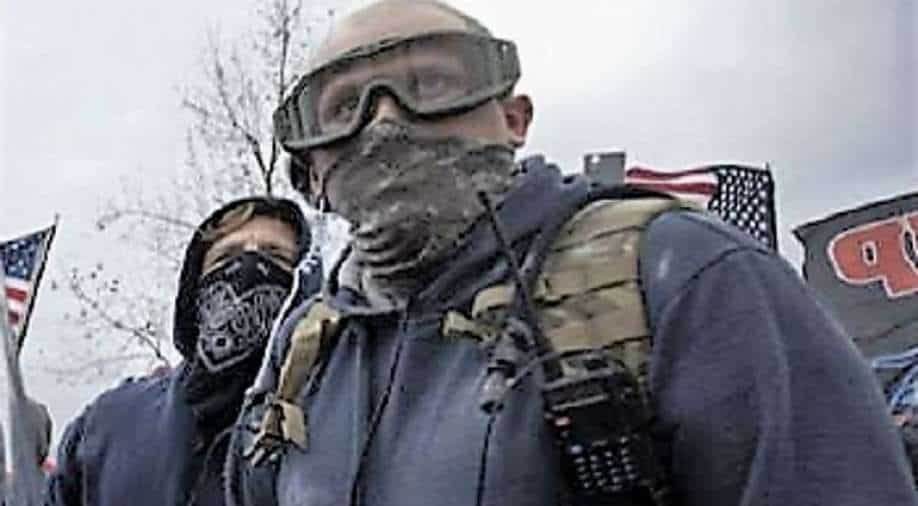 In an image provided by the Department of Justice, Matthew Greene, a member of the Proud Boys who took part in the Jan. 6 storming of the Capitol. Greene, who was “among the first wave” to rush up the Capitol steps, pleaded guilty to two charges and agreed to cooperate with the government, federal prosecutors said. (Dept. of Justice/The New York Times)  Photograph:( The New York Times )

Greene was 'among the first wave' to rush up the Capitol steps after the police line was breached, the US Attorney’s Office for the District of Columbia said in a statement Wednesday

A Proud Boys member who was among the first to cross the police line at the US Capitol on Jan. 6 pleaded guilty Wednesday and agreed to cooperate with the government — potentially against other members of the far-right extremist group, authorities said.

The defendant, Matthew Greene, 34, of Syracuse, New York, was most likely the first member of the Proud Boys, a group that describes itself as “Western chauvinists,” to plead guilty to charges stemming from the riot, his lawyer, Michael Kasmarek, said Wednesday.

Greene was “among the first wave” to rush up the Capitol steps after the police line was breached, the US Attorney’s Office for the District of Columbia said in a statement Wednesday. After he came down the stairs, he moved police barricades, prosecutors said. His lawyer maintains that he never entered the Capitol building.

Greene and other Proud Boys members had agreed before the siege to communicate through programmable radios, prosecutors said. They were “intentionally dressed in clothing that concealed their membership as Proud Boys,” the statement said.

Greene spent much of the rally alongside Dominic Pezzola of Rochester, New York, who was spotted bashing a Capitol window with a police shield in a widely seen video. Pezzola, 44, was later identified in a criminal complaint as part of a group that spoke about killing former Vice President Mike Pence and House Speaker Nancy Pelosi. He has pleaded not guilty to a litany of charges, prosecutors said.

Greene faces up to 25 years in prison on one count of conspiracy and one count of obstruction of an official proceeding, prosecutors said. But he could receive a sentence of 41 to 51 months because he agreed to cooperate with investigators, Kasmarek said.

He is set to be sentenced on March 10, prosecutors said. His lawyer declined to say where he was being held until then.

After Greene returned home from the riot, he ordered more than 2,000 rounds of assault-rifle ammunition and told an “acquaintance” to be ready “to do uncomfortable things,” according to a motion that prosecutors filed in June. The FBI seized his ammunition along with an AR-15 rifle and handguns while they were conducting a search at his home Jan. 18.

Greene was arrested in April and agreed to share information with the government, Kasmarek said, adding that Greene “wants to take responsibility for what he did.”

Prosecutors said the Proud Boys played a leading role in the attack in which a pro-Trump mob stormed the Capitol, injuring dozens of police officers in a rampage that left several people dead.

The organisation, which has maintained links with both overt white supremacists and more mainstream Republicans, has been a vocal — and often violent — supporter of former President Donald Trump. During one of the presidential debates, Trump seemed to signal his support by telling its members to “stand back and stand by.”

In the wake of the riot, federal authorities used the full scope of their powers to investigate the organization. FBI agents have executed search warrants in New York, California, Florida, Missouri and Washington state.

Along with Pezzola, Greene also spent much of the rally with William Pepe of Beacon, New York. The charges against Pepe, 32, were only scantly described. In a criminal complaint issued Jan. 11, prosecutors said that he had used a day of sick leave to attend a “Stop the Steal” protest in Washington, D.C., and was subsequently photographed inside the Capitol.

More than 700 people have been charged since the siege, the Justice Department said, including members of the Oath Keepers, a decade-old anti-government militia group. Four members of the group have pleaded guilty and are cooperating with investigators.