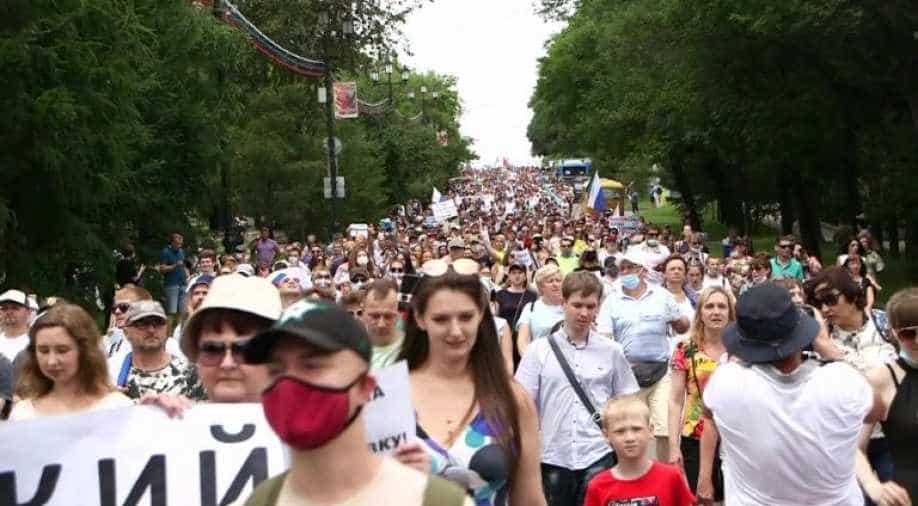 Tens of thousands attended a rally last weekend, according to journalists and activists, while police put the figure at just 6,500.

Locals say a struggle for democratic freedoms is unfolding in the far eastern Russian city of Khabarovsk, where the arrest of a popular governor has unleashed massive protests.

"Sometimes I feel like crying with joy when I see everyone so united," 21-year-old student Yekaterina Ishchenko told AFP.

For the last three weeks, she and thousands of other residents of the city 6,000 kilometres (3,700 miles) east of Moscow have taken to the streets, with another huge rally due on Saturday.

For Ishchenko, this is her first taste of political activism.

Tens of thousands attended a rally last weekend, according to journalists and activists, while police put the figure at just 6,500.

Such protests are rare in the region seven time zones away from the capital, where most opposition protests take place.

They were sparked by the arrest on July 9 of regional governor Sergei Furgal.

He was flown to Moscow where he is being held in custody.

His supporters see the probe as aimed at removing an overly independent politician, elected in 2018 after standing against an incumbent from the ruling party backing President Vladimir Putin.

"It's a slap in the face for us. We voted for him!" said 72-year-old pensioner Marina Beletskaya.

Furgal is a member of the nationalist party LDPR which is generally loyal to the Kremlin.

He became a popular governor, with supporters describing him as energetic and ready to listen. Locally, his level of popularity rivalled Putin's.

"After we elected Furgal, the capital of the Far Eastern Federal District was moved from here to Vladivostok," said 22-year-old Victoria Sakharova, a sales assistant, referring to the port city on the Pacific coast.

"This was clearly because we elected an opposition candidate."

Around the size of Turkey, the Khabarovsk region has a population of just 1.3 million.

One factor fuelling protests is long-standing resentment among residents who feel ignored by Moscow.

Added to this are the economic worries in this region bordering China where metallurgy, coal mining and forestry are the main areas of employment.

State media has largely ignored the protests but more independent outlets have described the events positively.

In a recent editorial Vedomosti daily called the protests a "new symbol" representing opposition of "regions against the centre".

Khabarovsk was one of those least supportive regions in a July 1 vote on changing the constitution to allow Putin to extend his rule. The "yes" vote was 15 percent below the national average.

In a bid to appease the protesters, Moscow appointed a new acting governor from Furgal's LDPR party, Mikhail Degtyarev.

But the 39-year-old MP, known for proposing wacky bills, has faced a chilly reception.

He made matters worse by claiming not to "have time" to meet protesters and alleging they received backing from foreign "provocateurs".

"We should have chosen a local person to replace him ourselves. But instead we were sent someone who only knows Khabarovsk from 5,000-ruble banknotes," said Sakharova. The banknote (worth $68) depicts views of the city.

In a sign that the scale of the protests may have spooked the regional authorities the police have shown unusual restraint, allowing the protests to go ahead and only detaining a handful of people.

Even Kremlin spokesman Dmitry Peskov this week praised the police's forbearance while unauthorised protests are usually quickly broken up in Russia.

"We're living through a moment of democracy but it will doubtless be fleeting."