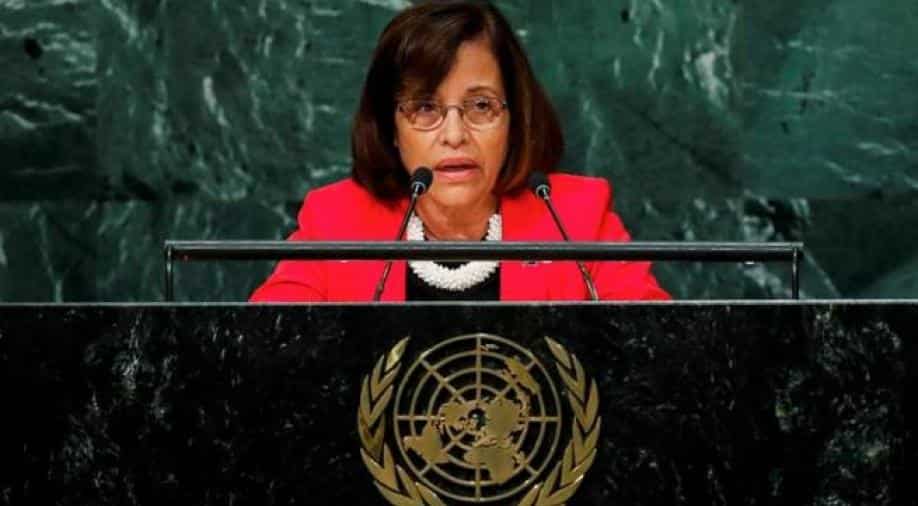 The vote to topple Heine, the first and only elected female leader of a Pacific island nation, split parliament 16-16, one short of the 17 her opponents required.

Marshall Islands President Hilda Heine narrowly survived a vote of no confidence Monday, seeing off a challenge she alleges was orchestrated by Chinese-backed business interests intent on undermining the Pacific nation's sovereignty.

The vote to topple Heine, the first and only elected female leader of a Pacific island nation, split parliament 16-16, one short of the 17 her opponents required.

In front of a packed public gallery, Heine and her allies spent 45 minutes defending the government's record, including claims from the opposition it had sullied the country's international reputation and eroded voting rights.

Once the vote was confirmed, Speaker Kenneth Kedi -- who had backed the no-confidence move -- congratulated Heine and declared parliament was in recess.

Heine said in the days leading up to the vote that the opposition's stated reasons for trying to unseat her were a "smokescreen" to cover their real motives.

She said the no-confidence motion was actually prompted by her government's refusal to back plans for an independently administered tax haven on an atoll within the Marshalls.

The proposed Rongelap Atoll Special Administrative Region (RASAR) is the brainchild of Cary Yan, a Chinese businessman and Marshall Islands citizen who launched the concept in Hong Kong earlier this year.

The idea is that the territory would be self governing and completely tax free, making it an attractive option for hi-tech firms.

Heine's government has rejected the proposal over concerns it could be vulnerable to money laundering and passport-for-sale scams.

She suggested last week that the RASAR could be a Trojan horse for China to take over part of her country.

The no-confidence vote was "an effort by certain foreign interests to take control of one of our atolls and turn it into a country within our own country," she told Radio New Zealand.

Beijing has used billions of dollars in investment to court influence with tiny island nations across the Pacific Ocean, a region considered strategically important as a maritime gateway to Asia.

Heine said she was determined to protect her country's sovereignty.

"We have to be cautious knowing what the geo-political situation is in the Pacific region," she said.

"I think it's important for the government to do its own due diligence and ensure that the sovereignty of the country is secure."