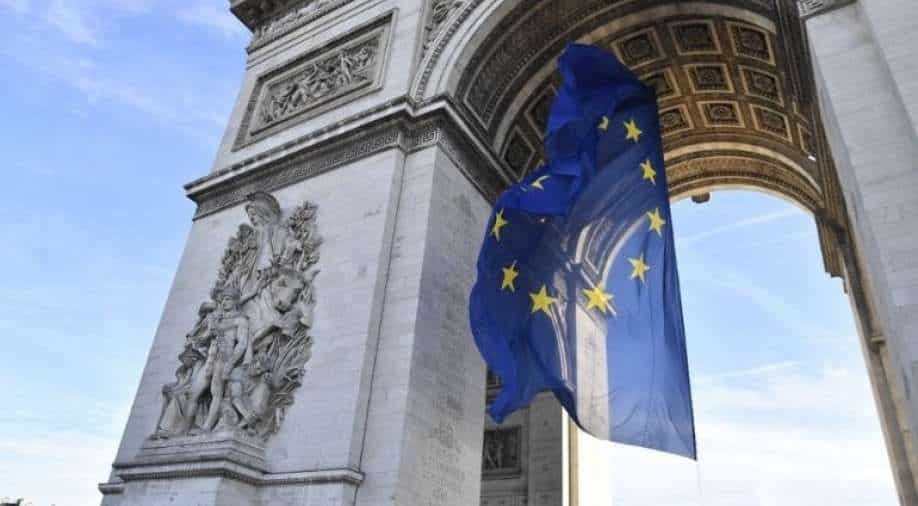 This picture shows the European Union flag under the Arc de Triomphe, on the Place de l'Etoile in Paris. Photograph:( AFP )

To mark the start of the six-month presidency, France had illuminated historic buildings across the country including the Eiffel Tower and the Arc de Triomphe in the blue of the EU flag on New Year's Eve

Right-wing contender in the 2022 French presidential election, Marine Le Pen, has accused the French government of breaking the law by hanging European Union's flag off the Arc de Triomphe in Paris.

According to her, “To adorn the Arc de Triomphe with the sole colors of the European Union, without the presence of a national flag, is a real attack on our nation’s identity, because this monument honors our military glories and houses the Tomb of the Unknown Soldier.”

To mark the start of the six-month presidency, France illuminated historic buildings across the country including the Eiffel Tower and the Arc de Triomphe in the blue of the EU flag on New Year's Eve.

Marine Le Pen also slammed French President Emmanuel Macron for betraying the duties of his office and displaying arrogant contempt for our history for the sake of personal ambition.”

"The French flag has not been replaced. The election campaign is not a free pass for petty lies and controversies," he tweeted.

France took over the rotating presidency of the European Union on Saturday, affording President Emmanuel Macron the chance to pose as the EU's de facto leader in the run-up to national elections in April.

The 44-year-old has never made any secret of his ambitions to be the motor for further European integration, serving over the last four years as a dynamic sidekick to the more steady German chancellor Angela Merkel in Europe's power couple.

With Merkel now retired and the timely gift of the rotating presidency of the EU Council from January 1, Macron has announced an ambitious agenda for the 27-member bloc that could also serve his domestic campaign for re-election.

"The year 2022 must be a turning point for Europe," he said in a New Year's Eve national address that hailed the EU's role during the Covid-19 crisis.

Referring to the French presidency, he vowed that "you can count on my complete commitment to ensure that this period, which comes around every 13 years, is a time of progress for you".

The centrist, who made his Europhile views a key part of his political campaign when winning the presidency in 2017, is hoping it will again serve him in elections scheduled for April 10 and 24.