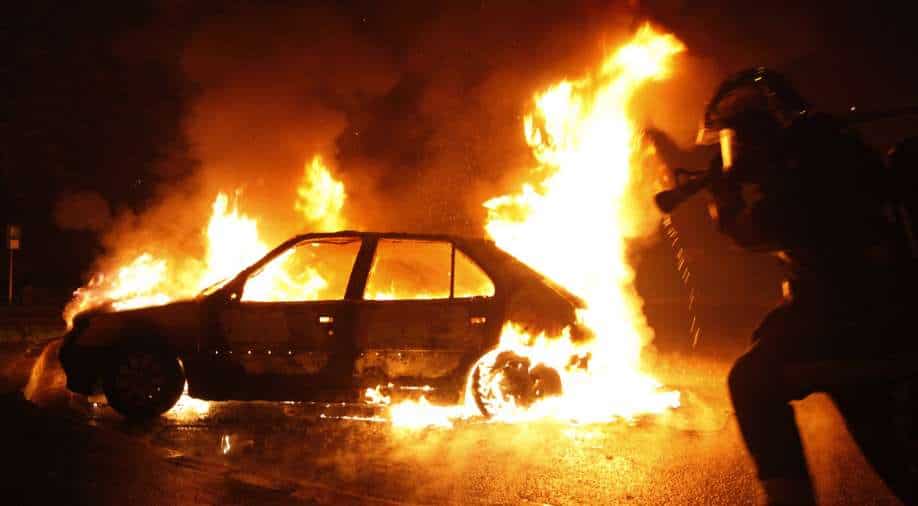 Cars torched on New Year's Eve in the region of Strasbourg Photograph:( AFP )

Dozens of cars were set on fire across Strasbourg, France after groups of vandals flouted an 8 pm curfew order as New Year’s Eve celebrations once again turned violent, the French Interior Ministry said on Friday.

Several police officers and firefighters were injured, and 40 vandals, some of them minors, were arrested.

According to Annie Bregal, Bas-Rhin’s director of public security in Strasbourg, ''In addition to a nationwide 8 pm curfew and a number of street closures in Strasbourg, fireworks had been banned for the entire month of December. Local police also set up “mobile forces” in “strategic locations” across the city''.

Smoldering cars, as well as those fully engulfed in flames, were seen in videos posted to social media, in some cases setting off loud blasts as the vehicles’ fuel ignited.

Every New Year’s Eve nervous car owners across France cross their fingers in the hope they can start the New Year with their vehicle intact.

That’s because of a longstanding French tradition that sees youths in certain parts of cities torching scores of cars.

The custom of setting vehicles alight on New Year's Eve reportedly began in the east of the country, around Strasbourg, in the 1990s, in the city's poorer neighbourhoods.

It was then quickly adopted by youths in cities across the country.

Cars are often set ablaze whenever there is an outbreak of social disorder, as seen in the 2005 riots when hundreds of vehicles were torched.