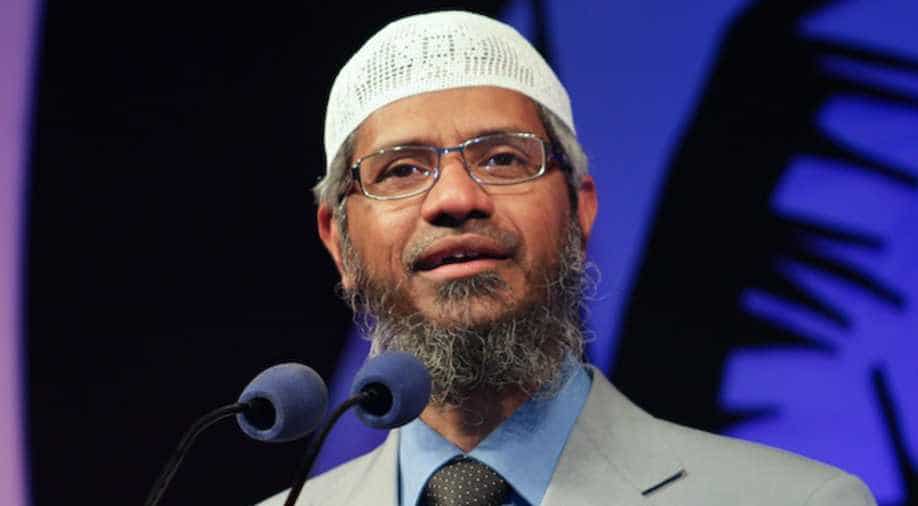 Last week, another city court had issued an NBW against Naik in a case of money laundering registered by the Enforcement Directorate against him. Photograph:( DNA )

The move comes after Zakir had recently alleged that the Hindus in Malaysia are more loyal to Prime Minister Narendra Modi than Mahathir Mohamad.

In signs of brewing trouble for Zakir Naik, Malaysia's human resources minister M Kulasegaran has called for action against the controversial preacher, blaming him for creating fissure in the country's multi-ethnic and multi-religious society.

"Naik is an outsider who is a fugitive and has little knowledge of the Malaysian history, therefore, he should not be given such privilege to run down Malaysians, what more question their loyalty to the country," Kulasegaran said in a statement cited by a Malaysian daily Malaysiakini.

"His actions do not reflect one deserving of permanent resident status and this will be brought up in the next cabinet meeting," the minister added.

In the letter issued on Tuesday, Kulasegaran also raised questioned if Zakir was attempting to create a fissure in Malaysia's multi-ethnic and multi-religious society so as to continue enjoying immunity and privileges by obtaining the support of the Muslim community.

Race and religion are sensitive issues in Malaysia, where Muslims make up about 60 per cent of its 32 million people. The rest are mostly ethnic Chinese and Indians, most of whom are Hindus.

The move comes after Zakir had recently alleged that the Hindus in Malaysia are more loyal to Prime Minister Narendra Modi than Mahathir Mohamad.

"Is Naik also leveraging the current polemics related to race and religion in the country for his biased survival and benefit via the taxpayers` money?" Kulasegaran was quoted as saying.

"Malaysia is a unique country that enjoyed relative peace and harmony as compared to many Islamic countries due to the great balancing act of its leaders since independence. The country`s supreme laws are secular and able to ensure the common good for all," the minister said in the letter.

"Should Malaysians be split over a man called Zakir Naik?" asked Kulasegaran, a parliamentarian from Ipoh Barat, a federal constituency in Perak, Malaysia.

The minister further urged his countrymen to remain united and safeguard the peace and stability of the nation by exposing Zakir's strategy of using religious and racial sentiments in a tolerant and harmonious country.

"It's time for the fugitive foreigner to leave Malaysia and to face charges of terrorism and money laundering charges in India," said Kulasegaran.

"This further seems to co-relate the Umno/PAS tactics that destabilise the Pakatan Harapan coalition government through ethno-religious sentiments," he added.

Naik has denied the allegations made by Kulasegaran and others in Malaysia.

Naik is facing charges of inciting communal disharmony and committing unlawful activities in India. He is also facing probe both in India and Bangladesh in connection with the terror attack at the Holey Artisan Bakery in Dhaka on July 2016.

The two suspects in the terror attack had claimed that they were inspired by Naik`s radical preaching.India said it has made a formal request to Malaysia and will continue to pursue his extradition.

Recently, Malaysian Prime Minister Mahathir Mohamad had said that his country has the right not to extradite Naik, for similar reasons that Australia had turned down his country`s request to extradite Sirul Azhar Umar in 2015. He also said that Naik believes that he would not be accorded justice in India.