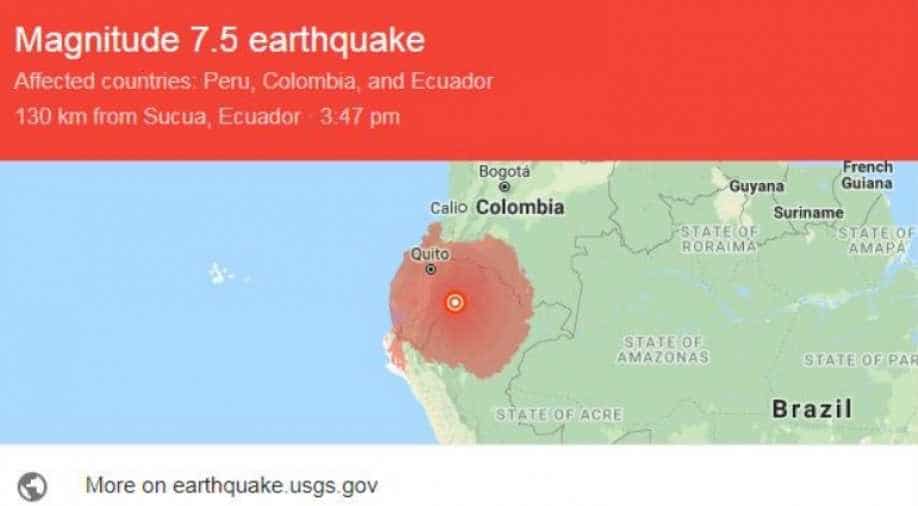 There was no risk of a tsunami being triggered, the Pacific Tsunami Warning Center said, and there were no initial reports of casualties or damage.

An earthquake with a magnitude of 7.5 hit Ecuador Friday but there were no immediate reports of casualties or major damage.

The quake struck before dawn in Ecuador's eastern Amazon region 17 kilometers (10 miles) from the town of Montalvo near the border with Peru, the US Geological Survey said.

It hit at a depth of 132 kilometers. Most major earthquakes in South America are at shallow depths of 70 kilometers or less, the USGS said.

There were two aftershocks, one in the same area and with a magnitude of just over 6.0, Ecuador's Geophysics Institute said. It gave the same 7.5 magnitude for the big quake.

"We have no reports of injuries so far, just some broken windows," said Tarcisio Ojeda, mayor of the town of Macas, in Morona Santiago province where the quake hit.

The other aftershock hit the Pacific coast region of Guayas but it did not do any harm either, President Lenin Moreno said on Twitter.

None of three tremors had the right features to trigger a tsunami alert, the Navy's Oceanographic Institute said.

In 2016 a quake with a magnitude of 7.8 hit the western provinces of Manabi and Esmeraldas, killing 673 people and causing an estimated $3 billion in damage.