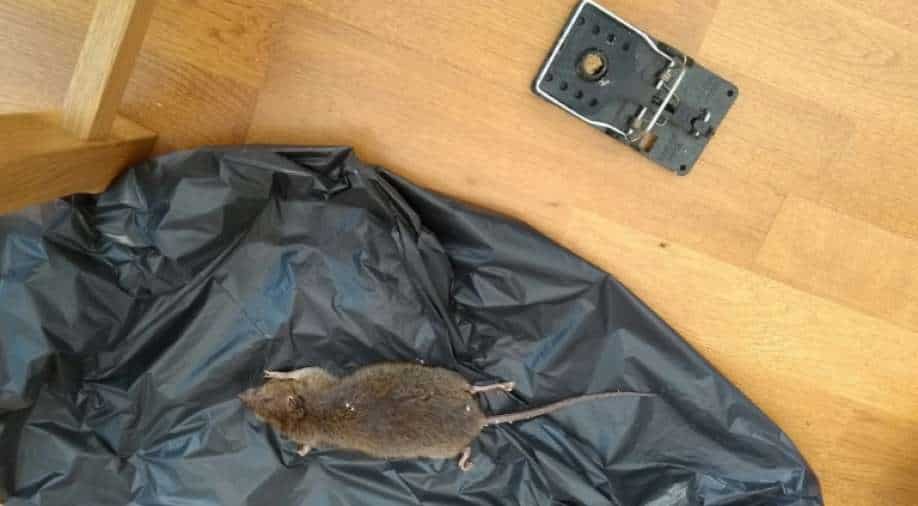 Britain is on its third lockdown since the pandemic took hold, which has provided ideal breeding conditions for rats.

"That's quite a big one," rat-catcher Colin Sims remarks with understatement, holding up a prime specimen measuring about 20 centimetres (eight inches) in length -- not counting its tail.

It's boom time for companies like Sims' CHS Pest Control, which has seen callouts to deal with rats jump 75 percent since Britain first entered coronavirus lockdown a year ago.

The rat infestation in London and other cities is growing acute as emboldened rodents take advantage of empty offices and seek out new food sources, with many eateries closed.

"It's a dirty animal so it's been in the sewer," Sims says as he holds up the rat by the tail, after it died in a trap he had laid in a southwest London home.

"It looks like a dominant male to me, it just found a way in, foraging for some food."

Finding its way in for this rat meant gnawing a large hole through a plastic waste pipe leading down from a ground-floor toilet, judging by signs of biting around the area.

According to the website Pest.co.uk, Britain's rat population surged by a quarter to an estimated 150 million last year.

"I've been working seven days a week since the lockdown" started in March last year on up to 12 jobs a day, Sims said.

Britain is on its third lockdown since the pandemic took hold, which has provided ideal breeding conditions for rats.

Deprived of the food scraps thrown away at the back of buildings or in now abandoned city-centre streets, the nocturnal pests are also daring to venture out more.

There have been increased sightings of rats in broad daylight, strolling around residential neighbourhoods where rubbish bins of housebound residents are quicker to brim over in lockdown.

"If we change our behaviour then they are more than likely going to change their behaviour, because they are very, very adaptable animals," Blackhurst said.

In rats' ravenous and never-ending quest for food, nothing resists their sharp incisors, leading to damage to wood, brick and even electrical cables, raising the risk of fire and floods.

"They just chew through it into the building," Chris Sherriff, of Beaver Pest Control, said as he inspected broken pipework under the front yard of a north London house.

With so many more people working from home, Lodge said residents were more aware of the problem in their neighbourhoods, which has grown worse in the winter months as rodents seek refuge from the cold indoors.

Others are in for a shock when they return to dormant premises.

Natalie Bungay, technical manager of the British Pest Control Association, described the case of one restaurant in western England.

"When they opened the doors, there were cans of food everywhere. The rats are gnawing through the soft metal, so it's not really a problem for them," she said.

With coronavirus rates falling thanks to a mass vaccination drive, Britain intends to exit lockdown by the summer.

That raises the prospect of more business owners re-entering shops and restaurants to find the messy remains of marauding rodent revellers.

Colin Sims says the vermin business shows no sign of letting up.

After dumping his plump dead rat in a trash bag for incineration, he drives his pickup truck to his next job, an infested commercial backyard.