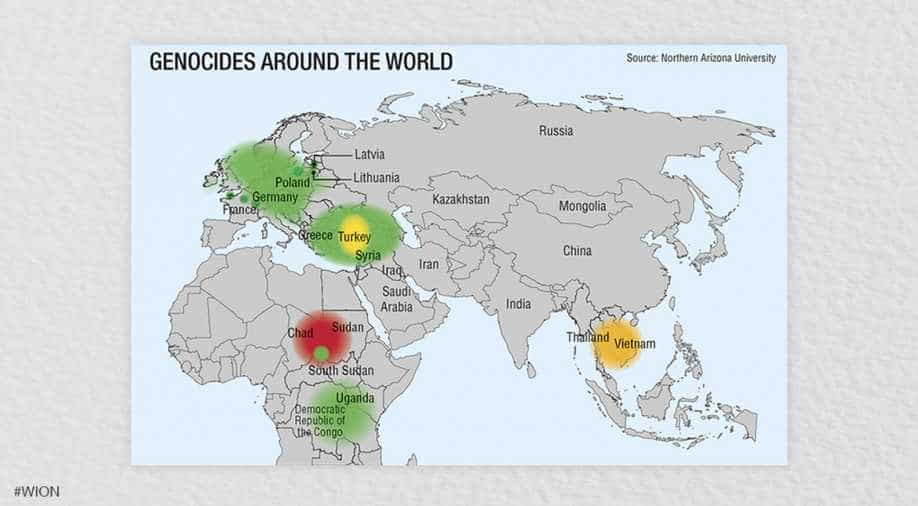 Ethnic cleansing or genocide has been carried out by nations at different points in the history Photograph:( DNA )

Communities are being wiped and killed, for their colour, gender, religion or ethnic origin. It is a scourge on humanity and it is antithetical to the idea of liberal democracies that was envisaged for the last two centuries by prominent thinkers, politicians and leaders. But it is in these last two centuries that the world has witnessed some of the most brutal killings on a scale one has never seen before.

A UN official reportedly said that Myanmar is carrying out ‘ethnic cleansing’ of Rohingya Muslims. The minority community is expe-riencing widespread violence, killings, gang rapes, torture and shootings. The remaining ones are fleeing Myanmar to the neighbouring nations.

According to a recent research, there will be no Hindus left in Bangladesh in the next 30 years. Hindus are migrating in hundreds every day from Bangladesh. The insecurities are making the Hindu minority community of Bangladesh to leave the country. This may not be a typical case of ethnic cleansing or genocide but a community is being completely wiped off from a nation.

Ethnic cleansing is defined as the expulsion of an ‘undesirable’ population from a given territory due to religious or ethnic dis- crimination, political, strategic or ideological considerations, or a combination of these.

The happenings in Myanmar are not unprecedented. Ethnic cleansing or genocide has been carried out by nations at different points in the history. In NorthAmerica, the Europeans drove out Native Americans from their lands forcing them to settle in allotted territories. In 1915, Turks massacred Armenians during World War I. From 1933 to 1945, Adolf Hilter carried out one of the largest ethnic cleansing episodes in the world by killing millions of Jews, believing that Aryans were a superior race. In the 1990s, ethnic cleansing happened in Yugoslavia;  Serbia set out to ethnically cleanse the Bosnian territory from Bosnian Muslims called Bosniaks. in Rwanda, the majority Hutu ethnic group massacred hundreds of people of the minority Tutsis.

Closer home, in 1990 around half a million Kashmiri Pandits fled the state of Jammu and Kashmir as the majority Muslim community wanted to cleanse the state from its minority. It is said that the Muslims in Kashmir were instigated by militants who were, in turn, backed by Pakistan to raise demand for an Islamic state. As a result, several Kashmiri Pandits were massacred and a vast majority fled the state to live the life of a refugee in their own country. In cyclic fashion, today the influx of Rohingya refugees to states like Jammu and Kashmir leave them vulnerable to militancy, a key concern for India in the state.

The mindset, the future

What is currently happening in Myanmar is not unprecedented, but the fact that such episodes are still taking place in the world reflects a huge deviation from the path of building liberal democracies around the world.

India is often called the ‘land of diversity’ where after every 100 km the language changes. It is said that there are innumerable religions, cultures, languages, ethnicities etc. all living together in harmony. But are we really living together in harmony? In a village, there is a clear demarcation between the areas inhabited by Muslims and Hindus. The distinction between the houses and amenities available to the upper castes and the lower castes is clearly visible. These demarcations have the potential to take the gruesome face of genocide or ethnic cleansing.

At present, there is a false sense of nationalism globally. Migration and terrorism have re-defined and distorted the definition of nationalism. It has become so rigid that the concepts of globalisation and liberalism are being diluted.

We belong to liberal democracies and have thrived under that idea, capable of dealing with religions and diversities around us.

If we want to continue on the path of liberal democracies we need to travel the path of amalgamation and assimilation. If any of us decide that we are superior to the other, then there is bound to be conflict and the peril of turning into genocides. The hope is that liberal democracy and acceptance of diverse communities will prevail and we will continue to thrive.