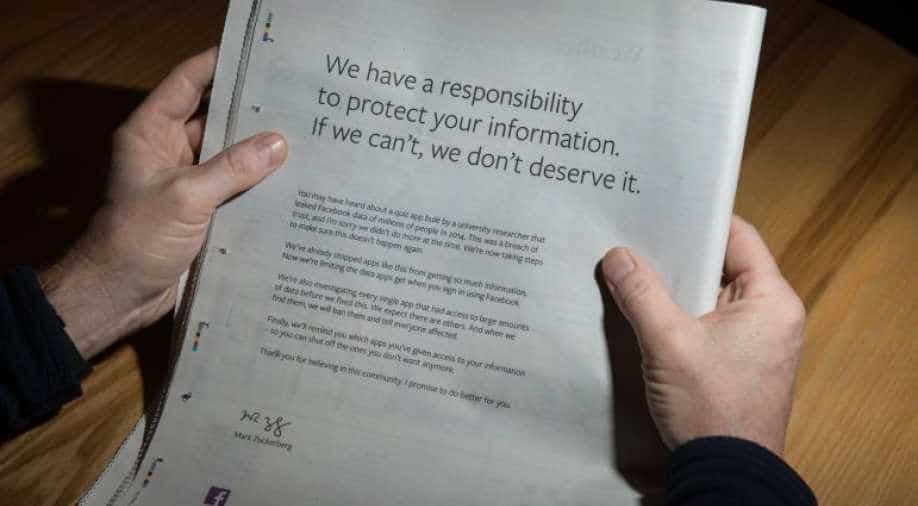 There was no mention of the UK-based data analytics firm, Cambridge Analytica Photograph:( AFP )

Almost all British national newspapers yesterday carried a full-page apology from Facebook in the wake of the data privacy scandal. The apology was signed by Mark Zuckerberg who stated that "This was a  breach of trust, I am sorry we didn't do more at the time. We are now taking steps to make sure that this doesn't happen again.

In the apology, Zuckerberg claimed that a quiz, developed by a university researcher, "leaked Facebook data of millions of people in 2014".

Zuckerberg hinted an extensive system and regulatory overhaul that the company will be undertaking to fix the existing loopholes and avert similar incidents from taking place.

However, there was no mention of the UK-based data analytics firm, Cambridge Analytica, the emerges at the centre of the Facebook data breach scandal.

"We have already stopped apps like this from getting so much information. Now we're limiting the data apps get when you sign in using Facebook," the ad read.

Zuckerberg also announced that now users will be equipped with the power to review all the apps that have access to their personal information -- "so you can shut off the ones you don't want any more".

Zuckerberg-led Facebook has lost over $50 billion in market value since the allegations surfaced.

"Thank you for believing in this community. I promise to do better for you," he wrote.