Leaders in Congress meet in search of spending and stimulus deals 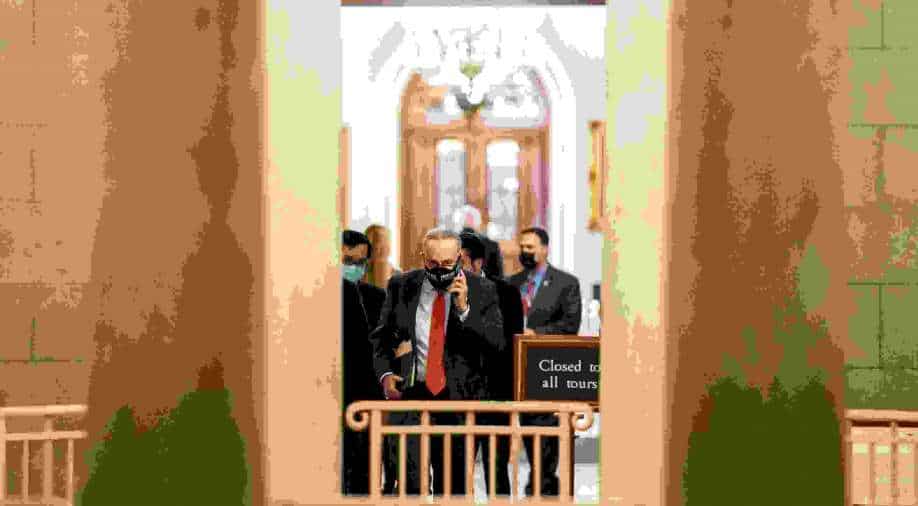 The meeting of the top two Republicans and Democrats in the House and Senate were the first in-person spending talks in months for the leaders, with a final deal still elusive on both the dozen must-pass spending bills and hundreds of billions of dollars in economic aid for individuals and businesses struggling amid the pandemic, and to fund the distribution of a vaccine.

WASHINGTON — Congressional leaders scrambled Tuesday to reach agreement on a stimulus bill and a catchall omnibus financing package to keep government funding flowing, meeting to try to hammer out critical spending deals before a Friday deadline.

The meeting of the top two Republicans and Democrats in the House and Senate were the first in-person spending talks in months for the leaders, with a final deal still elusive on both the dozen must-pass spending bills and hundreds of billions of dollars in economic aid for individuals and businesses struggling amid the pandemic, and to fund the distribution of a vaccine.

It took place in the Capitol office suite of Speaker Nancy Pelosi, D-Calif., who hosted Sen. Chuck Schumer of New York, the Democratic leader, and the Republican leaders Sen. Mitch McConnell of Kentucky and Rep. Kevin McCarthy of California.

The group met for a little under an hour to discuss how to resolve their differences before government funding is scheduled to lapse at week’s end, agreeing to reconvene later in the evening for a second session, according to a person familiar with the plans.

Treasury Secretary Steven Mnuchin joined the session by phone, after speaking separately with Pelosi for more than an hour.

Leaving the meeting, McCarthy signaled some degree of optimism, saying, “We’re continuing to work,” and, “I think there’s progress.”

The four leaders have agreed that any additional pandemic aid should be wrapped into the year-end spending measure, and that Congress should not adjourn without approving some pandemic relief as COVID-19 cases continue to rise across the country and the government works to distribute the vaccine to essential workers and others.

Even if Congress were to pass a bill this week, it may not be in time to prevent millions of Americans from going weeks with no source of income, given that many state unemployment offices have already programmed their systems to cut off benefits after next week, when the current pandemic programs expire.

Reinstating the benefits in those states will take time, especially because the plan being considered by Congress would make several technical changes to the programs, which the Labor Department must then incorporate into formal regulations, said Elizabeth Pancotti, a policy adviser for Employ America, an advocacy group. The Christmas and New Year’s holidays, when state offices are shut, will add further delays, she warned, though workers would eventually receive back pay for the weeks where their benefits lapsed.

There are still hurdles to a final agreement, particularly without a bipartisan consensus on the two thorniest policy impediments: a Democratic demand for additional aid to support state and local governments and a Republican push for sweeping liability protections for businesses, hospitals, schools and other institutions open during the pandemic.

It was unclear whether leaders of either party would embrace a $748 billion version proposed on Monday by a group of moderates in both parties, which separated out $160 billion for state and local governments and coronavirus liability protections for businesses and other entities, leaving them for another bill.

Before the meeting Tuesday, McConnell pointed to the bifurcated plan as he continued to push for lawmakers to jettison the two items and approve a narrow package with money for vaccine distribution, unemployment funds and help for schools and small businesses. After months of insisting that a sweeping liability shield was a “red line” for another package, McConnell said again that he was willing to drop the demand if Democrats would agree to abandon their top priority, as well.

“We all know the new administration is going to be asking for yet another package,” McConnell said at a weekly news conference. “It’s not like we won’t have another opportunity to debate the merits of liability reform and of state and local government in the very near future.”

Even if the four leaders were to reach an agreement, it would most likely face hurdles among some rank-and-file lawmakers, as Republicans chafe at the prospect of spending billions of dollars in taxpayer funds and Democrats argue that an agreement amounting to less than $1 trillion would be insufficient.

Some lawmakers are also mounting a pressure campaign to include direct payments for all working Americans in the stimulus deal. Two senators, Josh Hawley, R-Mo., and Bernie Sanders, I-Vt., have threatened to hold up the broader government funding bill if Congress failed to ensure that Americans receive payments of $1,200 per adult and $500 per child in the stimulus measure.

In a letter sent to the leaders, liberal Democratic lawmakers, led by Reps. Pramila Jayapal of Washington and Ro Khanna and Katie Porter, both of California, argued that such payments “are a crucial part of any COVID relief package.” They pressed for at least $2,000 in direct payments and at least six months of unemployment benefits, including enhanced supplemental benefits that expired earlier this year.

“There is absolutely no reason why we can’t put the direct payments in, and dare the Senate to take them out,” Jayapal said.

The White House has voiced support for another round of direct payments, and Mnuchin’s included a $600 stimulus check in his latest offer to Pelosi. But Democrats panned that $916 billion proposal because it failed to revive supplemental unemployment benefits that lapsed over the summer.

“I’m not going to say if that’s a red line or not,” Kayleigh McEnany, the White House press secretary, said when pressed on whether President Donald Trump would approve a stimulus package without direct payments. “We’re hopeful there is a deal there that the president can then look at and support.”