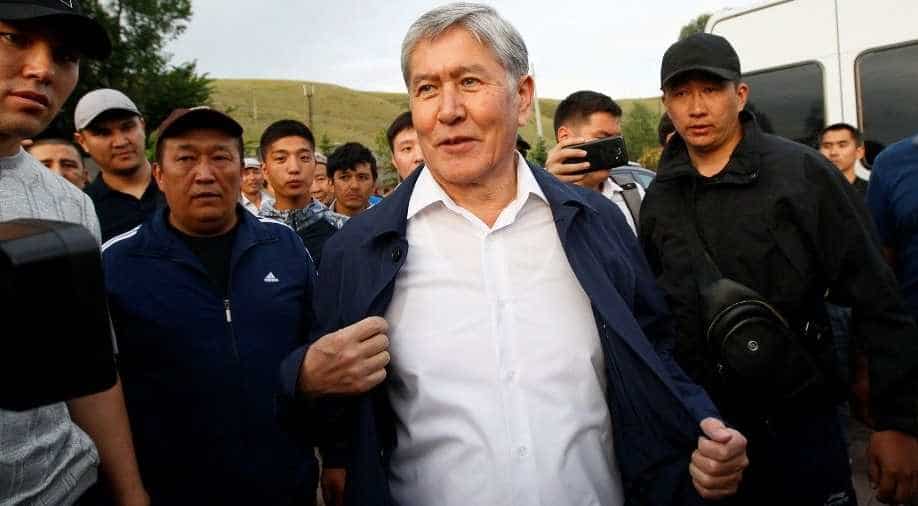 The Central Asian state is on the brink of crisis amid a standoff between ex-leader Almazbek Atambayev and his protege-turned-foe President Sooronbai Jeenbekov.

Kyrgyzstan's former president was detained in a major security operation Thursday, police said, a day after clashes between his supporters and law enforcement left one dead and dozens injured.

The Central Asian state, which has seen two revolutions in less than two decades, is on the brink of crisis amid a standoff between ex-leader Almazbek Atambayev and his protege-turned-foe President Sooronbai Jeenbekov.

Atambayev was detained by security services at his residence in the village of Koi-Tash near the capital Bishkek, after the second raid in two days on the compound.

He is currently being held at the building of the State National Security Service (GKNB) while hundreds of his supporters gathered in central Bishkek and blocked a major thoroughfare.

An AFP correspondent at the square next to the country's main house of government saw some of the supporters throw stones at a police vehicle driving through the area.

Police later broke up the crowd and brought the area under control using stun grenades.

The square was the site of two uprisings that unseated Kyrgyz presidents in 2005 and 2010.

Key ally Russia's Prime Minister Dmitriy Medvedev arrived in Kyrgyzstan Thursday for a meeting of a regional trade bloc and said he hoped that the situation would stabilise.

Kyrgyzstan "has already reached its limit for revolutions," Medvedev said.

"It would be very bad if this kind of event leads to political and, therefore, economic instability in the country."

A widely shared video from Koi-Tash showed Atambayev negotiate the terms of his surrender with Deputy Interior Minister Kursan Asanov Thursday, securing a guarantee that police would not harm supporters who have holed up with him at the compound in recent weeks.

Police said that no-one had died during the second operation, which saw law enforcement ram a military vehicle through the gates of the residence before using tear gas and smoke grenades to counter resistance from supporters.

Atambayev has ignored three police summonses for questioning in connection with the release of a well-known underworld figure during his presidency. The state prosecutor said Thursday that Atambayev figures in a total of five criminal cases. Critics say the investigations are politically motivated.

On Wednesday an already tense political situation escalated when the national security service announced an operation to take Atambayev from the residence outside Bishkek, capital of the Muslim-majority nation of six million people.

The first operation failed and descended into violence.

The health ministry said a special forces officer had died from a gunshot wound and the head of the Chui province police department was in a critical condition after being injured during the clashes on Wednesday.

The ministry said that 98 people required treatment as a result of the clashes on both days.

Early Thursday President Jeenbekov convened a meeting of the state security council and an emergency session of parliament.

Jeenbekov said during the security council meeting that Atambayev had "rudely flouted the Constitution and laws of the Kyrgyz Republic" by resisting detention.

Parliament in June stripped Atambayev of his immunity as a former president and the state prosecutor brought corruption charges against him.

The standoff has drawn in Russia -- the country's Soviet-era master and traditional political patron -- where hundreds of thousands of Kyrgyz work as migrant labourers.

Last month Russian President Vladimir Putin met with both Jeenbekov and Atambayev in Moscow in a bid to defuse the confrontation.

Erica Marat, associate professor at the National Defense University in Washington D.C., said Atambayev's outreach to Putin shows that "he clearly sees himself as a viable political figure in Kyrgyzstan", emboldening his stance against the incumbent leader.

Marat said the pair's confrontation is symptomatic of Kyrgyzstan's failure to reform its security institutions and courts.

"Jeenbekov must now decide whether to escalate violent confrontation with Atambayev's supporters or negotiate," Marat said.

But they fell out just months after Jeenbekov's inauguration as Atambayev publicly criticised his successor and security services arrested several key Atambayev allies.

Political analyst and video blogger Azim Azimov raised fears that the standoff might devolve into a "civil conflict... if both sides decide to take it to the end."

"This is the scariest potential outcome," he said in a video published Thursday morning.