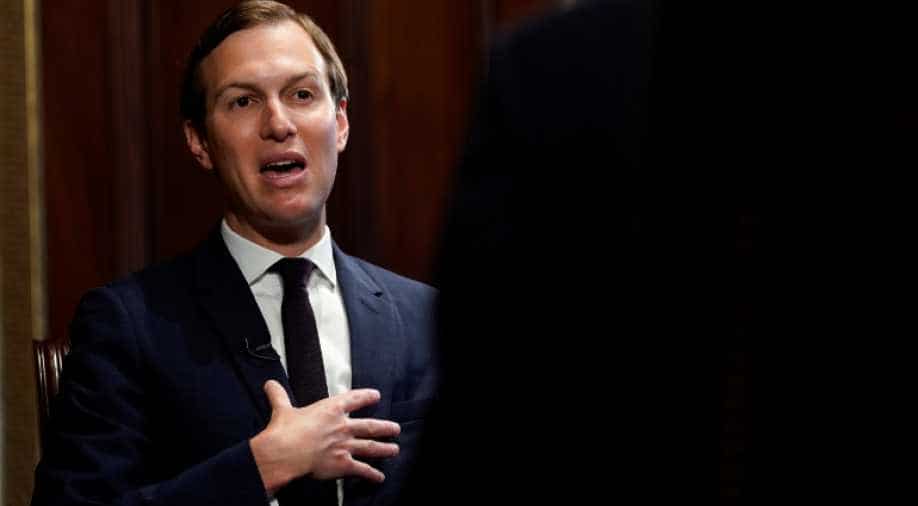 Closing the conference at a luxury hotel in the capital Manama, the 38-year-old real estate investor promised to put out the political plan at "the right time" and said the Palestinian Authority could help its people by embracing the US recommendations

Jared Kushner said Wednesday that the door remained open to the Palestinians to engage in his peace initiative as he accused their leaders of not caring about their own people for rejecting his $50 billion economic framework.

US President Donald Trump's son-in-law launched a long-awaited Middle East initiative with an intimate two-day conference in Bahrain, where economic leaders touted his plan as holding the potential to jumpstart the Palestinians' stagnant economy.

The Palestinian Authority boycotted the "Peace to Prosperity" workshop, accusing the unabashedly pro-Israel Trump of dangling the prospect of cash to try to impose political solutions and ignoring a fundamental issue of Israeli occupation.

Closing the conference at a luxury hotel in the capital Manama, the 38-year-old real estate investor promised to put out the political plan at "the right time" and said the Palestinian Authority could help its people by embracing the US recommendations.

"If they actually want to make their people's lives better, we have now laid out a great framework in which they can engage and try to achieve it," Kushner told reporters.

"We're going to stay optimistic," he said. "We have left the door open the whole time."

He said the Trump administration was trying a fresh approach to the long intractable Middle East conflict and that the authors of the economic framework had not seen the political plan.

"What the leadership has done is that they've blamed Israel and everyone else for all the people's problems, when in fact the common theme coming up is that this is all achievable if the government wants to make these reforms," Kushner said.

- 'Insult to our intelligence' -

In the occupied West Bank, senior Palestinian official Hanan Ashrawi told a press conference the US proposal was an "insult to our intelligence" and "totally divorced from reality".

"The economic peace, which has been presented before repeatedly and which has failed to materialise because it does not deal with the real components of peace, is being presented once again, recycled once again," she said.

"The elephant in the room in Manama is of course the occupation itself," she added. "The Israeli occupation, which was never mentioned -- not once."

Trump has taken a series of landmark steps to benefit Israel including recognising bitterly divided Jerusalem as the Jewish state's capital in 2017, leading the Palestinian Authority to cut off formal contact.

The Trump administration has hinted its political plan will not mention a Palestinian state -- a goal of US policy for decades -- and that it could accept the annexation of parts of the West Bank mulled by Prime Minister Benjamin Netanyahu, a family friend of Kushner.

The "Peace to Prosperity" sets an ambitious goal of creating one million new Palestinian jobs through $50 billion of investment in infrastructure, tourism and education in the territories and Arab neighbours.

Christine Lagarde, the managing director of the International Monetary Fund, praised the plan for focusing on jobs and said "all the goodwill in the world" was needed to prevent a severe deterioration of the Palestinian economy.

"So if there is an economic plan, if there is urgency, it's a question of making sure that the momentum is sustained," Lagarde said.

Tax revenue is being held up in a dispute with Israel, which has blockaded the Gaza Strip for more than a decade because of the Islamist movement Hamas' leadership of the crowded and impoverished territory.

Mohammed al-Jadaan, Saudi Arabia's finance minister, said the Palestinian issue was "very important" for the oil-rich kingdom, which would support "whatever brings prosperity to this region".

"The region is in desperate need of prosperity and hope," he said.

Obaid bin Humaid al-Tayer, minister of state for financial affairs of the United Arab Emirates, said that international institutions should back the plan to decrease risks.

"We should give this initiative a chance, we should be discussing it, and we should try to promote it," he said.

Israel has voiced support for the conference and, in precedented scenes, Israeli academics and journalists openly travelled to Bahrain despite the lack of diplomatic relations.

Coinciding with the Bahrain conference, Oman said it would open an embassy in the Palestinian territories -- a first for a Gulf Arab state.

The sultanate said it wished to show "support for the Palestinian people".

But Netanyahu paid a rare visit to Oman in October, raising speculation the embassy could be a way to soften the blow before recognition of Israel.

Gulf Arab nations have increasingly found common cause with Israel due to their shared hostility towards Iran, although Oman has sought a moderate approach and often serves as a go-between for Washington and Tehran.