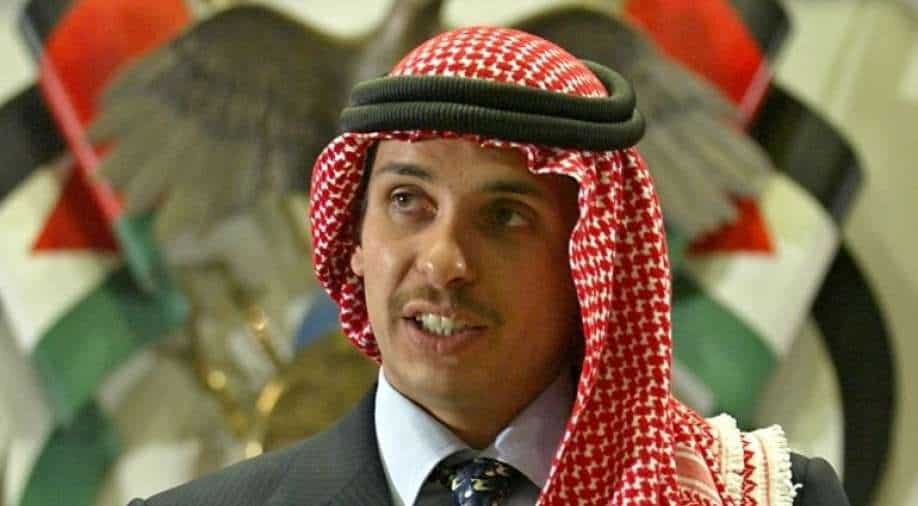 Jordan's Crown Prince Hamza bin Hussein delivers a speech to Muslim clerics and scholars at the opening ceremony of a religious conference at the Islamic Al al-Bayet University in Amman, Jordan Photograph:( Reuters )

Prince Hamzah had on Saturday harshly criticised Jordan's leaders from what he said was house arrest, but in a dramatic about-turn on Monday, pledged his loyalty to the royal family

Jordan banned all news outlets and social media users on Tuesday from publishing any content related to King Abdullah's half-brother Prince Hamzah after the latter was accused of plotting to destabilise the country.

Prince Hamzah had on Saturday harshly criticised Jordan's leaders from what he said was house arrest, but in a dramatic about-turn on Monday, pledged his loyalty to the royal family.

The palace released a signed statement in which the 41-year-old prince had changed his tone and pledged to "always be ready to help and support His Majesty the King and his Crown Prince".

The monarchy ruling Jordan -- a country long regarded as a pro-Western anchor of stability in a turbulent region-- declared it was settling the matter "within the framework of the Hashemite family".

Amman's prosecutor general on Tuesday banned the publication of any information about the investigation into what the government has called a "wicked" plot against Jordan involving unnamed foreign entities.

The government has accused Hamzah, a former crown prince who was sidelined as heir to the throne in 2004, of involvement in a conspiracy to "destabilise the kingdom's security" and also arrested at least 16 people.

"In order to keep the security services' investigation into Prince Hamzah and the others secret, (it is decided) to ban the publication of anything related to this inquiry at this stage," prosecutor Hassan al-Abdallat said in a statement.

"The ban on publication involves all audiovisual media and social networks, as well as the publication of all images or video clips relating to this subject on pain of legal action."

The government says he liaised with people linked to foreign parties in a plot to destabilise Jordan and that he had been under investigation for some time.

Prince Hamza said in a voice recording released by Jordan's opposition on Monday that he would not comply after being barred from any activity and told to keep quiet.

While not considered a direct threat to the king, Hamza in recent weeks visited tribal gatherings where the king and his government have been criticised more openly.

Saudi Arabia was among the countries to issue statements of support to King Abdullah, and on Monday Foreign Minister Faisal bin Farhan travelled to Amman to meet his Jordanian counterpart Ayman Safadi, the Jordanian foreign ministry said.

"King Salman reaffirmed the kingdom's support to all measures to protect Jordan and its interests," Saudi state TV reported.

King Abdullah had expressed "appreciation for the kingdom's continuous support to Jordan," it said.