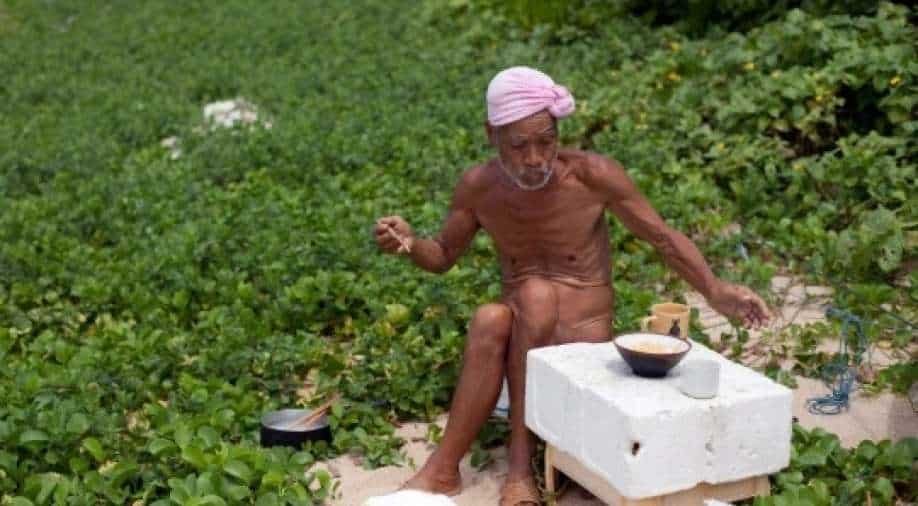 Masafumi Nagasaki is referred to as the 'naked hermit' Photograph:( Reuters )

Masafumi Nagasaki, dubbed the “naked hermit”, was a photographer in his fifties when he got fed up with civilisation

An 87-year-old Japanese man, who spent nearly three decades living on a desert island in a bid to escape civilization, has been granted his wish to bid farewell to his old island home one final time. Masafumi Nagasaki, dubbed the “naked hermit”, was a photographer in his fifties when he got fed up with civilisation. In 1989, he left his wife and two rumoured children and moved alone to Sotobanari, 1-km-wide densely vegetated and unpopulated islet, as he struggled to adapt to modern society in Japan and wanted to be alone on the isolated island. However, his stay was by no means easy. For one, there were no freshwater hundreds of kilometres south of Japan’s mainland. Also, his clothes were washed away in a typhoon, thus Nagasaki preferred being naked.

Gradually, he made Sotobanari his new home and lived there all by himself for 29 years.

But in 2018, a local fisherman spotted him lying unconscious on a beach. Doctors were called in who then took Nagasaki for hospital treatment as his health was deteriorating. He was later moved out of the island and that’s when his story became public.

Nagasaki’s journey was chronicled by Alvaro Cerezo, who documents island castaways and runs a company called Docastaway that drops tourists on deserted islands to live completely alone, according to the New York Post.

After his hospital treatment, the government gave him a bedroom and a “very little money” to cover his basic necessities.

Sadly, Nagaski has been unable to make many friends, as he had spent most of his time confined during the coronavirus pandemic.

“His tiny room became like his desert island where he could isolate himself, as it was the only place where he was able to live with clothes off and feel free like he did for the last 29 years,” Cerezo wrote in a blog post.

To pass the time, Nagasaki would often collect trash from the street but grew frustrated by the amount of pollution created by city inhabitants, Cerezo said.

“In a quintessential society like that of the Japanese, there was hardly anyone who could either understand his eccentric way of life or his extreme desire to live naked on a desert island,” Cerezo said.

The 87-year-old returned to Sotonabi earlier this month with the help of Cerezo’s company, Docastaway.

But was “luckily not sad to leave”, Cerezo told the New York Post.

He added, “It seemed he was satisfied to have had the opportunity to bid farewell to his island.”