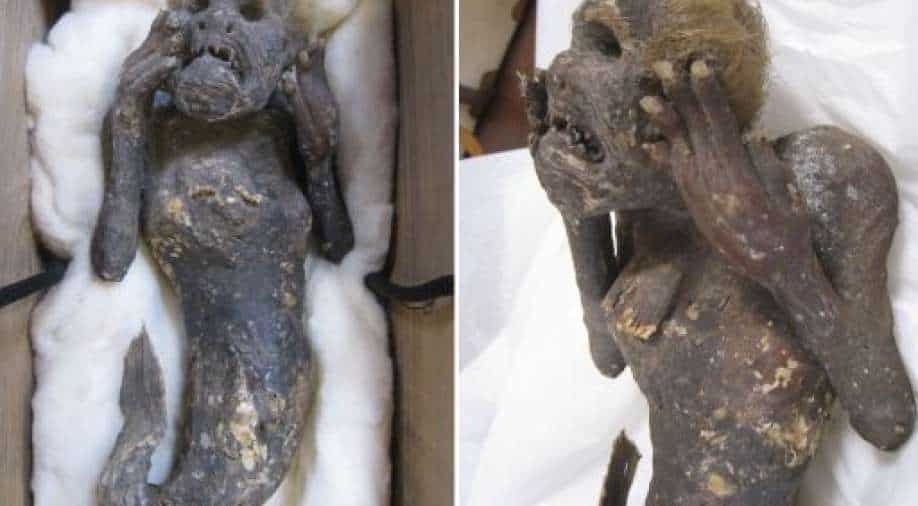 The mummified object has been sent for a CT scan Photograph:( Twitter )

The mummified object appears to have nails and teeth, hair on head and scales on its lower body

A mummy in the shape of a mermaid that is said to grant immortality to whoever tastes its flesh will be probed by Japanese scientists to trace its origin.

The bizarre 12-inch (30 centimetres) creature was allegedly caught in the Pacific Ocean, off the Japanese island of Shikoku, between 1736 and 1741.

It has now been preserved at a temple in Asakuchi city, Okayama prefecture in the southern part of Japan’s Honshu island.

The mummified object, which appears to have nails and teeth, hair on head and scales on its lower body, has been sent for a CT scan at the veterinary hospital of Kurashiki University of Science and the Arts.

Japan’s Asahi Shimbun newspaper said that mummy was found preserved in a box along with a note claiming the that it had been caught in a fishing net in the Pacific Ocean at some point between 1736 and 1741.

The “dried mermaid” was said to have been kept by a family and then passed to another before it was eventually acquired by a temple, which put it on display some four decades ago.

It is also being claimed that the object may have been produced as an item for export to Europe.

He said the creature could have religious significance.

“Japanese mermaids have a legend of immortality. It is said that if you eat the flesh of a mermaid, you will never die,” New York Post quoted Kinoshita as saying.

“There is a legend in many parts of Japan that a woman accidentally ate the flesh of a mermaid and lived for 800 years.”

He claimed that some people believed in the legend and used to eat the scales of mermaid mummies.”

The scientists who are examining the mummy will publish their findings later this year.