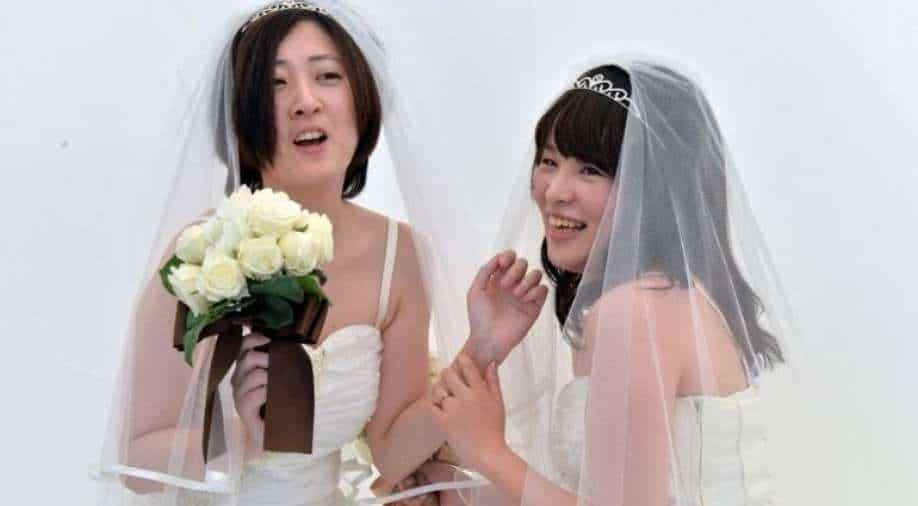 A lesbian couple smiles as they pose for photos taken by a wedding photo service company in Tokyo before participating in the "Tokyo Rainbow Pride" parade in Tokyo on April 27, 2014 Photograph:( AFP )

A district court in Japan on Wednesday ruled that same-sex couples not being able to marry is “unconstitutional”. The court, despite the ruling, threw out the plaintiffs’ demands to seek damages from the Japanese government, Reuters reported.

This marks the first ruling of its kind in Japan, and is being seen as a symbolic victory for the LGBTQIA+ community in the country.

Japan is the only G7 country to not fully recognise same-sex relationships. The country’s constitution defines marriage as “based on the mutual consent of both sexes”.

Constitutionally, "marriage shall be only with the mutual consent of both sexes". According to the government, this means that same-sex marriage is "not foreseen" in the constitution or civil law.

The verdict was not immediately confirmed by Sapporo court after several local media outlets reported the landmark ruling.

Currently, same-sex couples cannot inherit the assets of their partner, including the house that may have shared. In addition, they also have no parental rights to any of their partners' children.

Even though individual municipalities give out partnership certificates to ease renting places for LGBTQIA+ folks and to get hospital visitation rights, the couples are still not given the full legal rights on the same plane as heterosexual couples.

The court threw out demands for damages by six plaintiffs, including two couples of men and one of women - who sought 1 million yen each in damages that they suffered for not being able to marry.

Many other courts in Japan are currently hearing similar cases, and this ruling may influence the outcome in those cases.

Japanese laws are considered relatively liberal for Asian standards, and homosexual sex has been legal since 1880. Even then, the social outlook of the community has kept sexuality stigmatised.