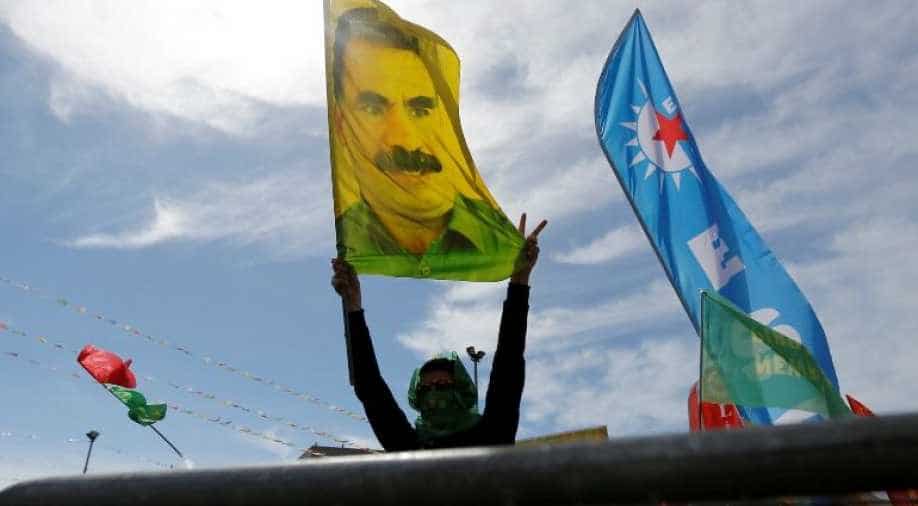 A man holds a flag with a picture of imprisoned Kurdish rebel leader Abdullah Ocalan during a gathering to celebrate Newroz, which marks the arrival of spring and the new year, in Istanbul, Turkey. Photograph:( Reuters )

Pro-Kurdish Peoples' Democratic Party (HDP) lawmaker Leyla Guven began a hunger strike in November to try to end Ocalan's isolation in prison by securing him regular access to his family and lawyers.

Jailed militant leader Abdullah Ocalan called for Kurdish lawmakers and thousands of prisoners to end their hunger strike in a statement read by one of his lawyers on Sunday, 200 days after one MP launched the protest.

Pro-Kurdish Peoples' Democratic Party (HDP) lawmaker Leyla Guven began a hunger strike in November to try to end Ocalan's isolation in prison by securing him regular access to his family and lawyers.

"Comrades who have committed themselves to hunger strikes and death fasts, I expect you to end your protest," Ocalan said in a statement read out at a news conference in Istanbul, four days after his lawyers visited him in jail.

Ocalan is the founder of the Kurdistan Workers Party (PKK), designated a terrorist group by Turkey, the European Union and the United States. He has been held in an island prison since Turkish special forces captured him in Kenya in 1999.

His lawyers visited him at the start of this month for the first time in nearly eight years and were allowed to hold talks with him again on Wednesday. A statement was scheduled to be made on behalf of Leyla Guven at 1000 GMT.

Ankara's decision to allow the resumption of visits comes a month ahead of an election re-run in Istanbul and has led to speculation that it could be a step towards a new peace process, four years after government talks with Ocalan fell apart.