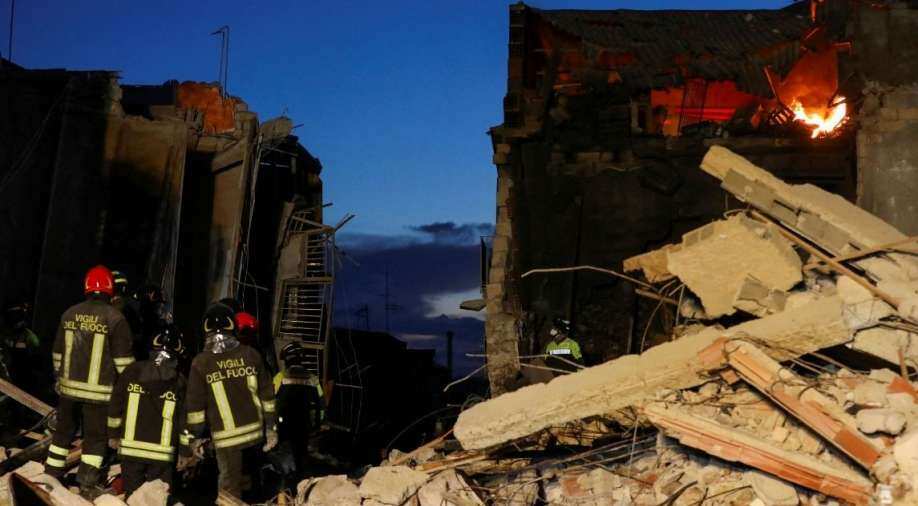 Members of a rescue team work at the scene where a four-storey building collapsed following a gas explosion, in Ravanusa, Italy. Photograph:( Reuters )

Vigili del Fuoco, which is Italy's institutional agency for fire and rescue service, released pictures and videos to show the scale of damage

Giuseppe Merendino, the head of firefighters in the province of Agrigento said that two people were found alive as and rescuers with sniffer dogs are trying to locate the missing.

ALSO READ | 'It looks like a bomb has exploded': Survivors tell horrifying experiences of 'deadliest' tornadoes in US

Local authorities have started the investigation to ascertain the actual cause, however, the initial probe suggested that the explosion was likely caused by a gas leak.

Vigili del Fuoco, which is Italy's institutional agency for fire and rescue service, released pictures and videos to show the scale of damage.

"The gas probably found a cavity in which to accumulate. This pocket of gas would then have found an accidental trigger: a car, an elevator, an electrical appliance, Merendino told the Rainews24 TV channel.

Commenting on the rescue operation, Merendino as quoted in the newspaper Giornale di Sicilia said that everything is "extremely difficult" because the buildings have collapsed on top of each other and the rubble is overlapping.

"We have to look for spaces between the rubble to recover the missing. Now, unfortunately, the dogs have given us no further indication and we have to search by other methods," he added.