'It looks like a bomb has exploded': Survivors tell horrifying experiences of 'deadliest' tornadoes in US 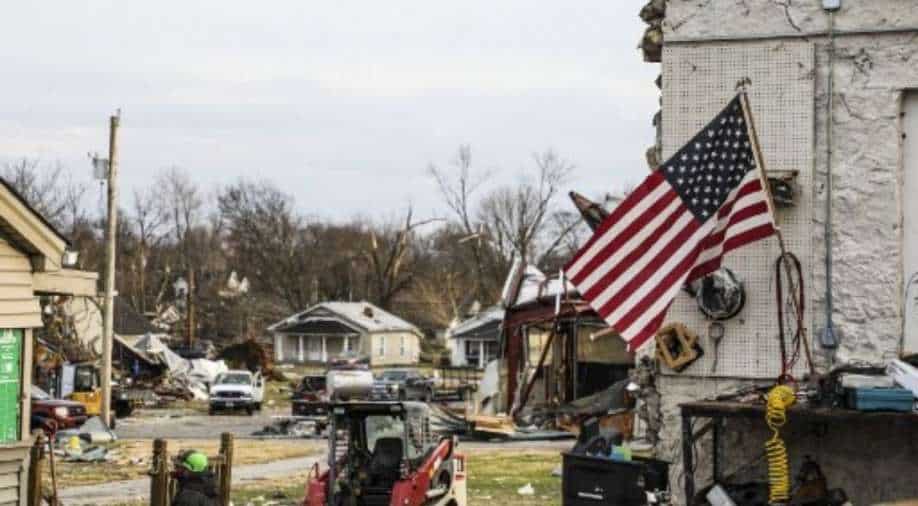 Rescue teams are working in a desperate search for survivors in the aftermath of devastating tornadoes in the United States that left at least 83 people dead and dozens still missing.

At least 30 tornadoes ripped through at least six states late Friday and early Saturday, causing massive destruction of life and property and those who survived are stunned after losing their house and business.

Commenting on the scale of destruction, US President Joe Biden declared a disaster in Kentucky, which is the worst-affected state. Other states that are impacted are Arkansas, Illinois, Mississippi, Missouri and Tennessee.

Biden called the wave of tornadoes, including one that travelled more than 200 miles, "one of the largest" storm outbreaks in the history of the United States.

"It's a tragedy. And we still don't know how many lives are lost and the full extent of the damage," Biden said in televised comments.

During the press conference, Kentucky Governor Andy Beshear said the scale of devastation is unlike anything he has seen in his life and he has trouble putting it into words.

More than 70 people are believed to have been killed in Kentucky alone. Many of the workers at a candle factory in the city of Mayfield as Beshear said there were about 110 people were there when the storm hit reducing to a pile of rubble.

The state governor also fears that "more than 100 people" are dead. 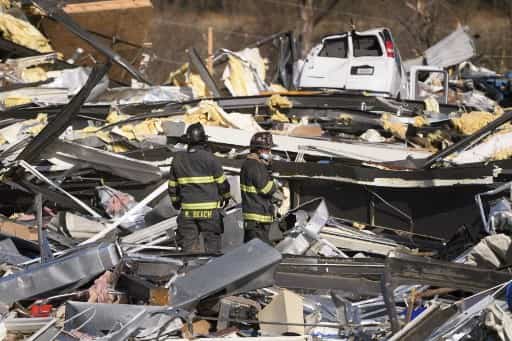 A heart-wrenching plea was played by CNN, which was a Facebook post by a factory employee. "We are trapped, please, y'all, get us some help. We are at the candle factory in Mayfield... Please, y'all. Pray for us," a woman was heard saying, who was rescued after being pinned under a water fountain.

"We never had anything like that here," David Norseworthy, who is a 69-year-old builder in Mayfield told AFP.

A 66-year-old Mayfield, Kentucky resident Janet Kimp told Reuters that she has lost everything. "I lost everything. You know seven, my house burnt completely to the ground. We rebuilt. Then my husband died in 09, and I had to file bankruptcy; I lost everything again. And now, I've lost it all again," Kimp said. 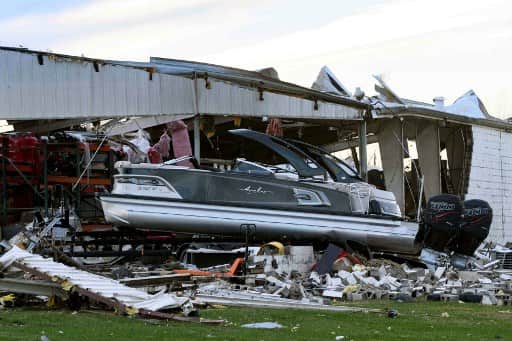 (Image: A boat sits at rest after being sucked out of a marine dealership by a tornado in Mayfield, Kentucky. Credit: AFP)

Mitchell Fowler, who runs a restaurant for nearly four decades, until the tornado destroyed it. He said that after a tornado warning from local authorities, he closed the restaurant around 8pm and asked his employees to go home and set off for his own home some 8 miles (13 kilometers) outside town.

"Before I got home, it was gone This was my restaurant, a family business for 38 years, I raised my family here, all my kids work here. It's devastating," Fowler told AFP regarding the restaurant.

Russian President Vladimir Putin on Sunday offered "sincere condolences". Putin told Biden in a telegram, according to the Kremlin, "Russia shares in the grief of those who lost loved ones as a result of this disaster. We hope the victims will recover and that the consequences of this disaster will be overcome quickly."