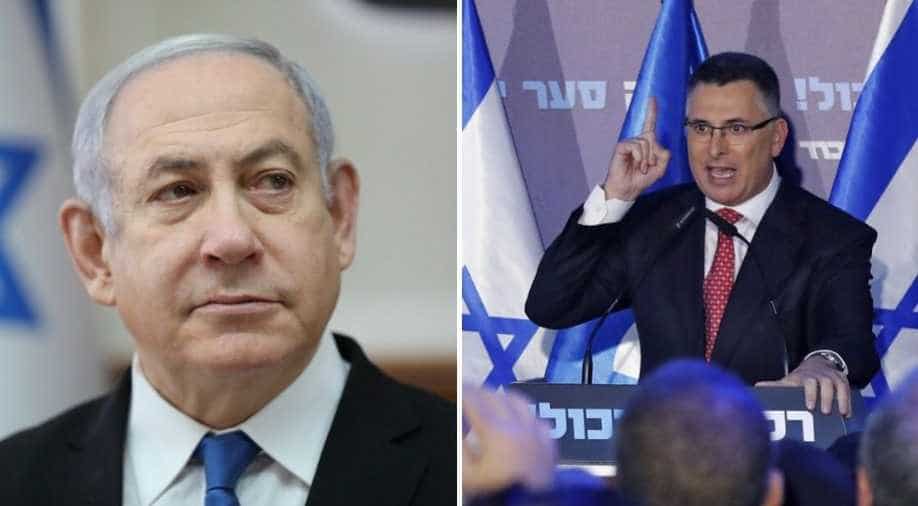 A defeat for Netanyahu, 70, would be a shock, but even a relatively close result could weaken his influence over the conservative party he has dominated for 20 years

Israel's embattled premier Benjamin Netanyahu faces off against longtime rival Gideon Saar in a Likud party leadership contest Thursday that could threaten his grip on power.

A defeat for Netanyahu, 70, would be a shock, but even a relatively close result could weaken his influence over the conservative party he has dominated for 20 years.

Whatever the result, "Netanyahu can only lose", said Stephan Miller, a pollster who has worked on multiple Israeli campaigns.

No matter how much support Saar receives, "it will be the first time in 10 years that a group of voters on the right explicitly express their desire to get rid of Netanyahu," he said.

"If that is more than a third of the party, Netanyahu will be significantly damaged."

In power as premier for a decade, Netanyahu is facing a third general election within 12 months as well as an indictment on a series of corruption allegations.

Saar and Netanyahu have spent recent days crisscrossing the country, making their case to around 116,000 Likud members eligible to vote, though Netanyahu has not responded to Saar's call for one-on-one debates.

More than 100 voting stations were to open across the country at 9:00 am (0600 GMT) and close at 11:00 pm, with results not expected until early Friday morning.

The winner of Thursday's vote will lead Likud into Israel's third election within 12 months.

Polls in April and September saw Netanyahu deadlocked with centrist challenger Benny Gantz, neither of them able to command a majority in Israel's proportional parliament.

Last month, Netanyahu was indicted for fraud, bribery, and breach of trust in three corruption cases, allegations he strongly denies.

The primaries were called shortly after, the first internal challenge to Netanyahu since 2014.

Saar, 53, has been a senior figure in the Likud for a decade and held multiple ministries, but stepped away from politics for several years in 2014 after being politically sidelined by Netanyahu.

He is seen as slightly to the right of Netanyahu and has called for an even tougher line with the Palestinians.

A series of polls in recent weeks have indicated a Saar-led Likud might win fewer seats in a third election than under Netanyahu, but the overall rightwing bloc might be larger -- potentially enabling it to break the impasse and form a majority government.

Saar has not attacked Netanyahu personally, even hinting he would support him becoming Israel's president.

A source close to Saar insisted they were hopeful of an upset.

"More and more, the Likud rank and file are understanding the choice is between Netanyahu and being in opposition versus Saar and being in government," the source said.

Netanyahu has sought to paint himself as an irreplaceable leader fighting a "witch hunt" by the police, the legal establishment, and the media.

He demands fierce loyalty inside Likud and has isolated and ultimately forced out multiple potential rivals.

Other party figures are seen as potential future leadership candidates including parliamentary speaker Yuli Edelstein, who has so far chosen not to support either candidate, despite the pressure.

Ofer Zalzberg, an Israeli political analyst at the International Crisis Group think tank, said it would have been unthinkable a few years ago for senior party officials not to publicly back Netanyahu.

"They already sense there is a changing of the guard. They are hoping that the contest between Saar and Netanyahu will create the conditions for a third party to take home the spoils," he said.

Netanyahu's downfall has been predicted multiple times since he became prime minister for the second time in 2009, but he has defied expectations and outlasted multiple rivals.

Backed into a corner on multiple fronts, Netanyahu appears determined to fight his way out.

Politics professor at the Hebrew University of Jerusalem Gideon Rahat said he would not step down, even in the event of a narrow victory over Saar.

Netanyahu "will continue, even if he gets 50 percent and one extra vote," he said.

Under Israeli law, a prime minister is entitled to remain in office despite the indictment.

Miller said the very fact there was a primary was indicative of signs of discontent among the rightwing over which Netanyahu has ruled largely unchallenged for a decade.

"In every survey of voters I do, 58-60 percent of Jewish Israelis self-identify as center-right or right a built-in rightwing majority," he said.

"The way that the Netanyahu era ends is by a challenge from the right not the left."