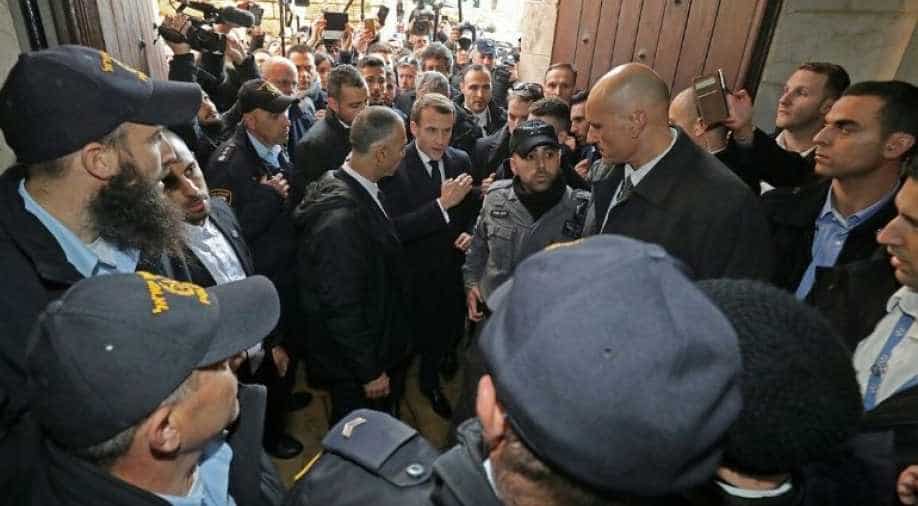 Macron is one of many world leaders who are attending the fifth World Holocaust Forum in Jerusalem.

Jerusalem's Old City saw a heated exchange between Israeli security and Emmanuel Macron when the French President was visiting the Church of Saint Anne. The building belongs to the French government and is considered French territory, within the premises of which Marcon was filmed admonishing security personnel for trying to follow him into the Church.

Officers were accused by Macron for violating rules that prevented them from entering the Crusader-era Church of Saint Anne. "I don't like what you did in front of me. Go outside, please," he warned them in English. [When French President Emmanuel Macron visited Jerusalem's Old City Wednesday, he also walked in the footsteps of one of his predecessors, Jacques Chirac, by engaging in a heated argument with Israeli security.In this file photo taken on October 22, 1996 of French President Jacques Chirac pushing an Israeli security man as he protest angrily over tight security surrounding his visit to the Arab part of Jerusalem's old city. ]

"Nobody has to provoke. Please respect the rules, they are [in place] for centuries. They will not change with me, I can tell you," Macron added during the dispute. A spokeswoman for the Elysée Palace told CNN that the President had intervened after an exchange between Israeli and French security.

"St. Anne belongs to France in Jerusalem. It is up to France to protect these places in this city. The Israeli security forces wanted to enter while security was being provided by French security services. The president reacted to an altercation between the Israeli and French security forces at the time of entering Saint Anne to end it, and to remind everyone of the rules that apply," the spokeswoman said.

More than 40 world leaders will be visiting Jerusalem including the French President Emmanuel Macron for the fifth World Holocaust Forum being held in the Old City. US Vice President Mike Pence, Britain's Prince Charles, President Vladimir Putin and other dignitaries will be in attendance.

Macron is one of many world leaders who are attending the fifth World Holocaust Forum in Jerusalem and dignitaries such as Russian President Vladimir Putin, US Vice President Mike Pence and British Royal Prince Charles are in attendance. Israeli officials state that the visit went according to plan, despite the "discussion" between French and Israeli security personnel.

"Based on the terms agreed upon ahead of time, an Israel Security Agency (ISA) guard and a policeman escorted the French president and his delegation inside," the joint police and ISA stated. An apology was also issued by the French President once the delegation had concluded its visit to the church, they added; though spokespersons travelling with Macron declined to confirm or deny that statement.

Israeli sovereignty over the Old City is not recognized by France as it lies in the eastern part of Jerusalem which the European nation of France regards as occupied territory. Though most of the world shares that characterization, it is disputed by Israel, which considers all of Jerusalem to be its sovereign territory.

Many have stated that the incident was reminiscent of one involving the late French President Jacques Chirac in 1996 when he was filmed in heated dialogue with Israeli security officials during a visit to the same Church.