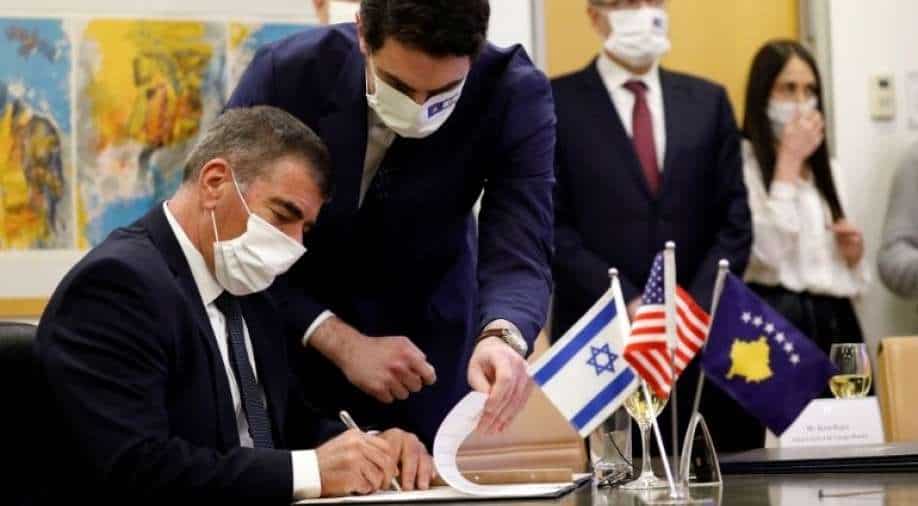 Israel has since August normalised ties with four Arab nations under a series of deals brokered by former US President Donald Trump, collectively known as the Abraham Accords

Israel and Kosovo established diplomatic relations on Monday, via online links due to the coronavirus crisis, under a US-brokered deal that includes a pledge by the Muslim-majority country to open an embassy in Jerusalem.

Israel has since August normalised ties with four Arab nations under a series of deals brokered by former US President Donald Trump, collectively known as the Abraham Accords.

But the majority-Muslim parties to those accords, the United Arab Emirates, Bahrain, Morocco and Suda, have all said their diplomatic missions will be in Tel Aviv, in line with a global consensus against recognising Jerusalem as Israel's capital until the Palestinian conflict is resolved.

During a signing ceremony held via Zoom video conference, Israeli Foreign Minister Gabi Ashkenazi said the new ties were "historic" and "reflect a change in the region and in the Arab (and) Muslim world's relationship with Israel".

Ashkenazi said he had received an official request from Kosovo to establish a Jerusalem embassy, which Israeli officials hope will open by end-March.

Only two countries - the United States and Guatemala - have embassies in Jerusalem. Others, including Malawi and Honduras, have pledged to make the move.

The status of Jerusalem is one of the thorniest obstacles to forging a peace deal between Israel and the Palestinians, who with broad international backing want East Jerusalem, captured by Israel in the 1967 Middle East war, as their capital.

The ceremony included the unveiling of a commemorative plaque that will be placed at the entrance to Kosovo's embassy in Jerusalem upon opening, Israel's foreign ministry said.

Kosovo Foreign Minister Meliza Haradinaj-Stublla said Kosovo and Israel share a "historic bond" and had both "witnessed a long and challenging path to existing as a people and becoming states".

Kosovo declared independence from Serbia in 2008, almost a decade after a guerrilla uprising by its ethnic Albanian majority.

Haradinaj-Stublla said she had spoken in recent days with US Secretary of State Antony Blinken, who she said voiced President Joe Biden's support for Kosovo's new relations with Israel and economic agreement with Serbia.