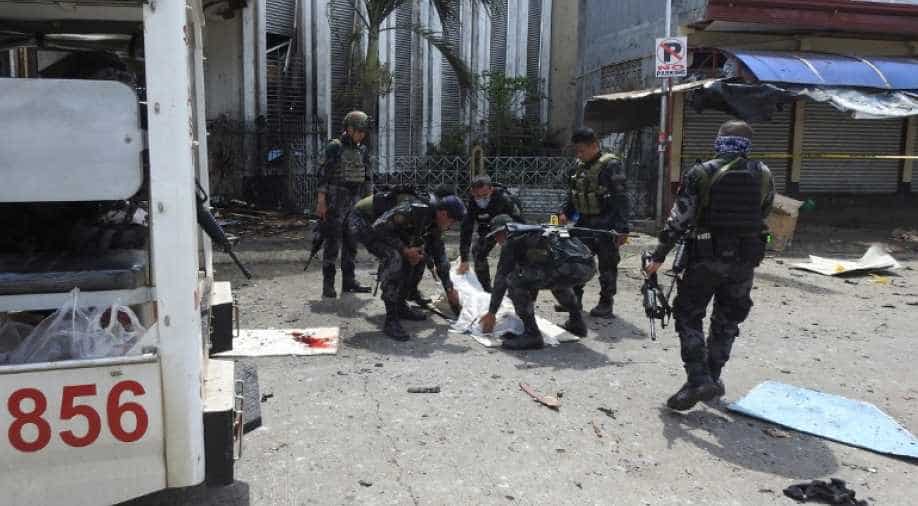 Philippine security personnel carry a body bag containing the remains of a blast victim after two bombs exploded at a church in Jolo. Photograph:( AFP )

Two explosions tore through the cathedral on the Muslim-majority island of Jolo, killing worshippers at Sunday mass and security forces in an attack claimed by the Islamic State group.

Two explosions tore through the cathedral on the Muslim-majority island of Jolo, killing worshippers at Sunday mass and security forces in an attack claimed by the Islamic State group.

Authorities said the so-called Ajang-Ajang faction is a small band of several dozen that most likely carried out the bombing, the Philippines' worst in years, in an act of revenge.

"Last year their leader was killed. There have been persistent reports that they will retaliate," regional military spokesman Lieutenant Colonel Gerry Besana told AFP.

"Yes, we saw them in the CCTV. It was the brother of the leader who was killed," he said referring to footage from outside the cathedral. "He was seen with two other members of Ajang-Ajang."

Security forces say the group is composed of relatives of Abu Sayyaf kidnap-for-ransom group members who have been killed in clashes with the government.

Abu Sayyaf, which is based on the remote Jolo island, has been blamed for the Philippines' deadliest attack, a 2004 ferry bombing in Manila Bay that claimed 116 lives.

"There are high-level law enforcement operations against them (Ajang-Ajang)," said Rommel Banlaoi, chair of the Philippine Institute for Peace, Violence and Terrorism Research. "It evolved into a revenge group."

While Abu Sayyaf has sworn allegiance to Islamic State, that is not necessarily true for the motley members of Ajang-Ajang.

"Not all members of Ajang-Ajang group are pro-ISIS, but all of them are Abu Sayyaf group," said Banlaoi using another acronym for IS. "It's not IS-affiliated."

The IS claim, in a formal communique, said two suicide bombers had detonated explosive belts, according to the SITE Intelligence Group, which monitors jihadist activities.

But a military report said a second bomb that went off at the cathedral was left in the utility box of a motorcycle in the parking area outside.

Police said they believe the explosives were likely detonated remotely but did not elaborate.

Despite the contradictions, authorities have not ruled out IS involvement.

Regardless of who staged the bombing, concern was growing Monday over the impact it will have on a decades-long push for peace that culminated last week in voters approving expanded Muslim self-rule in the south.

"This is a big challenge for the Bangsamoro government," said Banlaoi.

The former rebels need to show they will be able to pull the region toward peace in order to attract much-needed investment to alleviate poverty and counter extremism, he told AFP.

The church attack came despite President Rodrigo Duterte putting the southern Philippines under martial rule after pro-IS militants seized the southern city of Marawi in May 2017.

Government officials have argued that martial rule, which gives authorities extra powers, has been effective in taming the perpetually restive region.

Meanwhile, condolences poured in from around the world for the victims at the cathedral, which has been repeatedly targeted by grenade attacks that did not prove fatal.

Pope Francis, speaking in Panama, expressed his "strongest reprobation" for the violence. Once again, he said, "the Christian community has been plunged into mourning".

But experts were also worried about how the attack would impact the hopes for new development in the region, which were spurred by the self-rule vote victory.

"When we see conflict areas, when we see ups-and-downs and negative impacts due to violence and conflict, what we see is also these are development opportunities that are squandered."