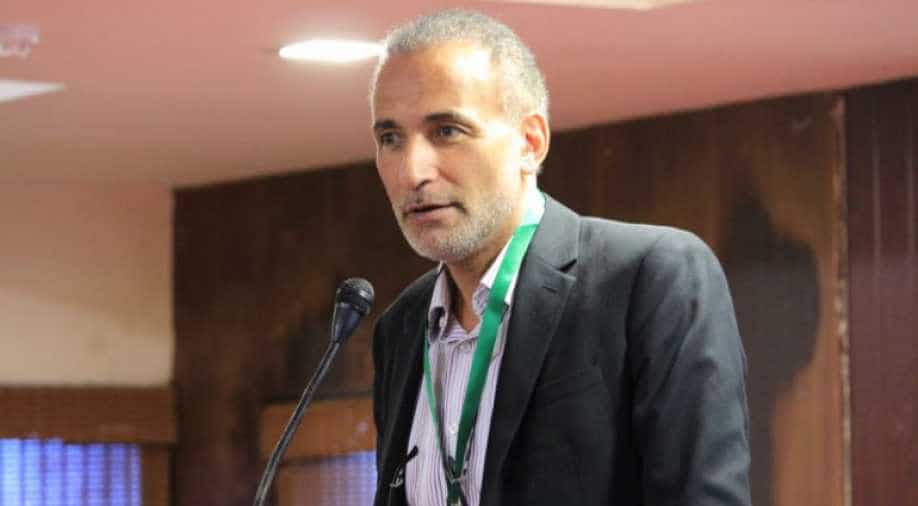 Two women have accused Ramadan of assaulting them in French hotel rooms in 2009 and 2012. (Image source: Wikimedia Commons) Photograph:( Others )

Islamic scholar Tariq Ramadan has been charged with rape, a judicial source said, following claims by two women that he assaulted them in French hotel rooms in 2009 and 2012.

Ramadan, who was arrested by French police on Wednesday, was charged on Friday with connected charges of rape and rape of a vulnerable person, the source said.

The accused is a Swiss citizen whose grandfather founded Egypt's Muslim Brotherhood movement.

After two days of questioning by investigators, the 55-year-old Oxford professor was brought before three magistrates who have been assigned to the case, suggesting that he is facing an extensive investigation, judicial sources said.

"If there are other victims in France or elsewhere, they now know that the justice system will respond to what has happened to them," said Jonas Haddad, lawyer for feminist activist Henda Ayari, the first woman to accuse Ramadan.

Women who have testified anonymously during three months of preliminary investigations might now also file rape complaints, one of the sources said.

The claims against the prominent scholar, which emerged in the wake of the Harvey Weinstein scandal in the United States, have divided many Muslims, with his legions of fans, as well as his lawyers, saying he is the victim of a smear campaign. But critics have long suggested that despite Ramadan's moderate tone as a familiar face on television programmes, he preaches a more radical line when addressing Muslims in Arabic

The claims against the prominent scholar, which emerged in the wake of the Harvey Weinstein scandal in the United States, have divided many Muslims, with his legions of fans, as well as his lawyers, saying he is the victim of a smear campaign.

But critics have long suggested that despite Ramadan's moderate tone as a familiar face on television programmes, he preaches a more radical line when addressing Muslims in Arabic.

Ramadan is the most high-profile figure to be held in France over the sexual assault and harassment claims that have rippled around the world as a result of the "Me Too" campaign.

The married father of four has denied the accusations from the two women.

'Humiliations'
The first was made by Ayari, a feminist activist who previously practised a conservative strain of Islam. She had described being raped in a book published in 2016, without naming her attacker.

But in October, she said she had decided to name Ramadan publicly as the alleged perpetrator as a result of the "Me Too" campaign, using the French hashtag "Balance Ton Porc" (Expose your pig).

She said Ramadan raped her in his hotel room, telling Le Parisien newspaper: "He choked me so hard that I thought I was going to die."

She lodged a rape complaint against Ramadan on October 20.

Several days later an unidentified disabled woman, a Muslim convert, also accused the academic of raping her in a hotel room in the southeastern city of Lyon in 2009.

Vanity Fair magazine, which met the woman, said her lawsuit against Ramadan described "blows to the face and body, forced sodomy, rape with an object and various humiliations, including being dragged by the hair to the bathtub and urinated on".

During three hours of testimony in Paris on Thursday, the woman -- using the pseudonym "Christelle" -- recounted her allegations to the judge in Ramadan's presence.

She also revealed that Ramadan had a small scar on his groin that would not have been noticed except in the case of close contact, a source said.

Rejecting her testimony, the scholar refused to sign the official summary of the account, sources close to the case said.

"Both sides maintained their positions," one of the sources said.

'Campaign of lies'
During three months of investigations since the allegations emerged, police have interviewed dozens of people close to both Ramadan and the two women, and examined email and social media exchanges between them.

In November, Oxford University said Ramadan was taking a leave of absence from his post as professor of contemporary Islamic studies, "by mutual agreement".

He has also denied allegations in Swiss media of sexual misconduct against teenage girls in the 1980s and 1990s, denouncing them as "a campaign of lies launched by my adversaries".

Lawyers for Ramadan have accused Ayari of slander and suggested the women colluded to try to disgrace him.

As part of his defence, he has presented investigators with Facebook conversations in which a woman identified as Ayari allegedly made explicit advances towards him in 2014, two years after the alleged rape.

The accusations have sparked heated online debate between supporters of Ramadan, who commands a following of more than two million fans on Facebook, and his opponents.

Despite his leave of absence from Oxford, Ramadan continues to head the Islamic Institute for Ethical Training in France.

Ayari was placed under police protection in November after receiving death threats.