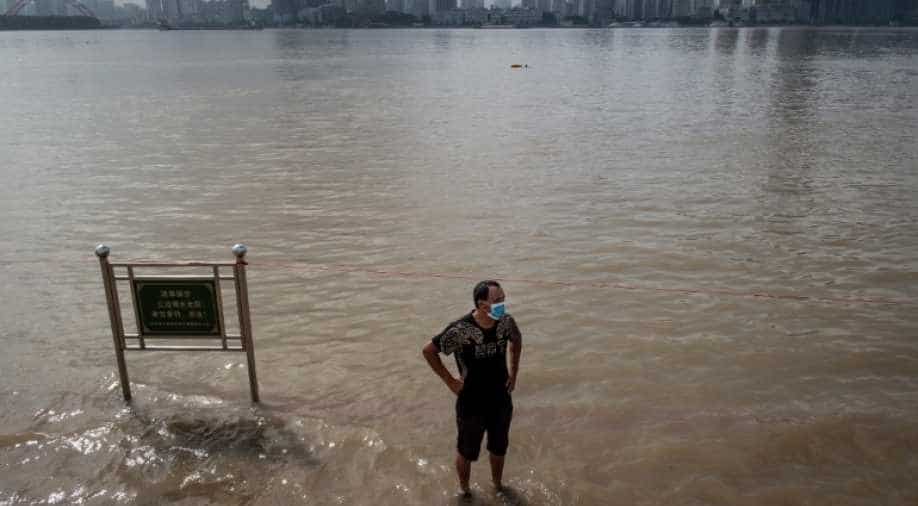 This photo taken on July 6, 2020 shows a man standing on a flooded street on the banks of the Yangtze River after heavy rain in Wuhan in China's central Hubei province Photograph:( AFP )

As of now, eight people have lost their lives to the floods

Wuhan - the original epicentre of the COVID-19 pandemic in China is now facing another calamity in the form of floods.

On January 23 2020, the city was overwhelmed by an explosion of COVID-19 cases, after which an unprecedented lockdown was imposed on the city’s 11 million residents.

As of now, eight people have lost their lives to the floods. The fury of the calamity hasn’t spared the supermarkets, shops, and the streets. Rainstorm warnings have been issued for the next 31 days. And people of Wuhan have been asked to stay in again.

However, is the flooding natural? Reports suggest that the floods are a direct consequence of a heavy discharge of water from reservoirs.

368 kilometres away from Wuhan lies the Three Gorges Dam in the district of Yiling, which has been releasing floodwaters from its spillways.

According to Chinese authorities, the dam is on the verge of collapse, mandating the release of water. Chinese activists are now claiming that the opening of spillways is intentional.

Jennifer Zeng, an activist recently claimed that this move was undertaken intentionally, and that Chinese authorities are deliberately flooding cities in the Hubei province to purge out the evidence against China and its role in the coronavirus pandemic.

A World Health Organization team is scheduled to visit China next week to investigate the origins of the virus, and will probe how the zoonotic virus jumped from animals to humans.

Ready to help to Israel-Palestine if ceasefire sought, says US