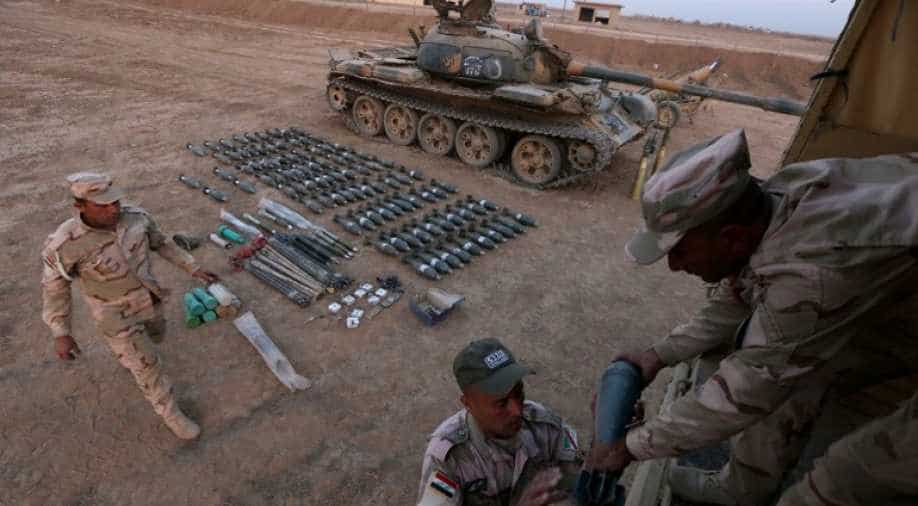 A report released Wednesday found a sophisticated system that pours out tens of thousands of standardised mortars, rockets and explosives. In photo: Soldiers of the Iraqi army displaying weapons confiscated from the IS group on November 7, 2016. Photograph:( AFP )

Factories churning out tens of thousands of munitions and an entire street turned into a conveyor belt for car bombs: advances by Iraqi forces around Mosul have laid bare the scale of the Islamic State group's arms industry.

In the more than two years since it seized control over swathes of the country, IS established a sprawling and highly organised system that experts say no other insurgent group has matched.

The capability has seriously boosted the threat from the group as it battles ferociously to cling to territory in Iraq and Syria -- and the fresh intelligence could now prove vital in countering its plots to carry out attacks on the West.

Iraqi army deminer Hashim Ali picked his way carefully through the rubble as he explained how IS transformed Mart Shmony street in Qaraqosh, some 16 kilometres (10 miles) southeast of Mosul, into a production line of death after seizing the town in 2014 and forcing the mainly Christian population to flee.

Once it was a bustling thoroughfare of car workshops and stores selling Turkish furniture, but for the jihadists it offered all they needed to make the armoured car bombs they use to blow up civilians and slow advancing Iraqi troops.

In one building they stripped the vehicles, in the neighbouring one they cut the metal plates for armour. A few doors down they made the explosives. Just up the road they loaded the bombs into the car.

"These people are not stupid, they are very well organised," Ali told AFP. "If you give them more time then they always find ways to surprise you."

Nearby the remnants of a pickup truck with a metal plate welded to its front stood inside a former furniture shop devastated by an air strike from the US-led coalition backing Iraqi troops.

In towns, villages and districts retaken from IS the pattern was repeated.

AFP visited a number of sites where the group cannibalised existing infrastructure to create their own improvised arms factories.

In a former cement plant in the town of Areej the lathes in a cavernous hall had been put to work manufacturing mortars and rockets. Moulds for shells lay on tables and unfinished casings littered the floor.

At another location nearby, part of an abandoned gas storage facility was strewn with the deadly improvised explosive devices IS produced there.

The white powder of homemade explosives spilled out of large bombs that the group had not had time to lay in the path of the advancing Iraqi troops.

"In terms of scale, planning, centralised command and control and the precision to which they are manufacturing, this is something else," James Bevan, director of Conflict Armament Research, a UK-based group which investigates arms flows around the globe, told AFP.

"I can't name another armed group that manufactures on such a scale and with such a degree of coordination."

Bevan and teams from his organisation have been on the ground in Iraq cataloguing the extent of IS arms production.

Their findings, detailed in a report released Wednesday, show a sophisticated system that pours out tens of thousands of standardised mortars, rockets and explosives on an "unprecedented scale" and under strict quality controls.

While the raw materials for shell casings and missiles come from scrap metal and spare parts in the cities that IS have captured, the explosives and propellant are made from precursors mostly procured in bulk from the open market in Turkey and diverted through Syria.

As proof of their high standards the final IS products are often painted a military green, branded with the group's logo and packed into specially made crates to be dispatched to the various fronts it is fighting on.

On the battlefield the weapons they manufacture themselves have proven an important way for IS to supplement their flow of factory-made arms seized from government forces or rebel groups in Iraq and Syria.

Commanded by former Iraqi military and intelligence officers, the group has fought conventional campaigns with the help of its own improvised weaponry.

But now, as the group faces increasing fragmentation with the territories it controls under pressure from various offensives, the intelligence being gleaned could prove invaluable for countering its threat beyond its shrinking heartland.

"This will be critical for future efforts to counter the spread of this group," said arms expert Bevan.

From France and Belgium to Egypt and Turkey the group and its affiliates have already carried out bloody terror attacks in a string of countries across the globe.

Earlier this month the Europol police agency warned that IS were evolving their tactics to attack soft targets in Europe and could use the deadly car bombs they have employed to devastating effect in Iraq and Syria.

"If you look at the Iraq and Syria theatre as a hotbed for the development of more and more sophisticated improvised devices then it is probably unparalleled," Bevan said.