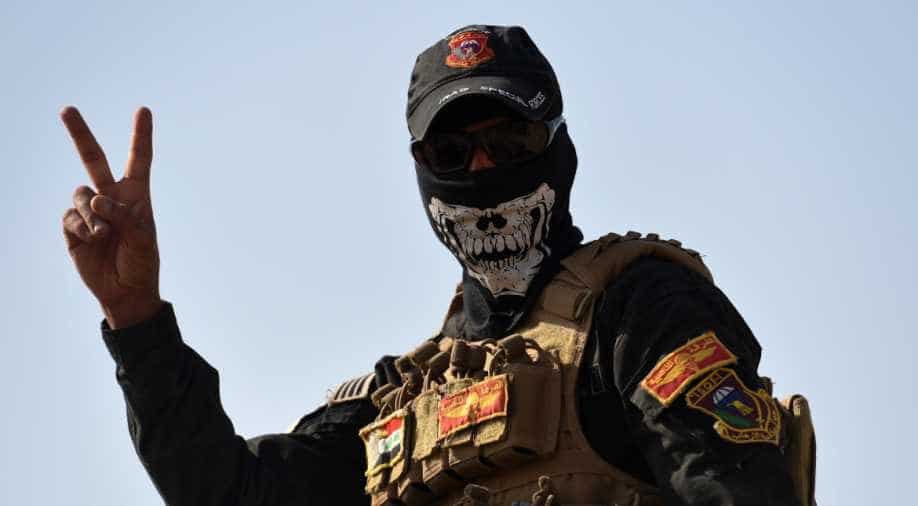 An Iraqi soldier gives a V sign during the offensive to recapture the city of Mosul from Islamic State militants, on October 23, 2016 in Bartella, Iraq. Photograph:(Getty)
Follow Us

Iraqi Counter Terrorism Forces (ICTF) officially entered the eastern outskirt of Mosul, stabilising their presence in the village of Gogjali. Taleb Kanani, the ICTF commander, told reporters on the ground that the area is now under full control of the Iraqi army.

According to a BBC reporter who followed the operation embedded, regular forces faced strong resistance.

The advance is ongoing and Iraqi troops are moving forward. According to Lieutenant General Abdul Amir Rasheed Jarallah, the deputy-commander for the Joint Operations, the ninth division has entered Judaydat al-Mufti, a neighbourhood located south of Gogjali.

It is the first time in two years that a regular force has crossed the border of the Islamic State's (IS) de facto Iraqi capital. However, it is unlikely that this battle could represent an early end to the offensive: there are still many villages located on the belt surrounding Mosul which need to be reconquered and secured, especially on the northern side.

But the possibility of conquering and securing even a small portion of the city represents a major success in the offensive to drive IS out of Mosul.

The Iraqi army will have the possibility to launch regular raids to weaken and test the enemy’s line of defence and to intercept their communications, opening an entire new phase of the offensive based on urban-style guerrilla combat.

The offensive proceeds as scheduled and the plan to choke the city from several areas is taking place. Mosul is also under attack from the western front, where several militias, predominantly Shiite, launched an offensive to reconquer the town of Tal Afar.

Meanwhile, Turkey is deploying a significant number of soldiers and tanks in the town of Silopi, near the Iraqi border. Turkish defence minister Fikri Isik declared that his country has the right to act in order to protect its citizens from terrorism, and that they have no “obligation” to wait behind its borders while threats increase.

A war with parallel wars

It seems, though, that Isik's main concern is not the Islamic State but the Kurdistan Workers Party (PKK) and the Shia militias based west of Mosul, both perceived as threats to the ethnic Sunni Turkmen population living in the area.

Turkish President Erdogan declared on Saturday that Ankara will have a “different response” in case Shiite militias would “cause terror” in Tal Afar. Erdogan’s fears are not unfounded: the NGO Human Rights Watch documented and reported the many abuses perpetrated by Shia militias against Sunni civilians in recent operations, especially the ones to reconquer the city of Fallujah.

Defending human rights is not the only variable. Many Shia militias are under direct Iranian influence, and by tackling them Turkey is also tackling Tehran's willingness to extend its area of influence beyond its western borders.

The PKK, a socialist organisation classified as terrorists by Turkey, has a significant presence in the western Iraqi constituency of Sinjar, a mainly Yazidi town which their guerrilla soldiers contributed to reconquer from Islamic State in 2015. The PKK guerrillas have also participated in the operation to defeat the Islamic State commando who attacked the city of Kirkuk one week ago, and are willing to take part in the Mosul offensive. This could earn further political legitimacy to an organisation with whom Turkey fought a three-decade separatist insurgency, an eventuality Ankara would certainly not permit.

The situation between the PKK and Turkey is currently at its lowest. After the July coup, Ankara gave new lifeline to its attacks against the organisation and are generally against the Kurds living on its soil; many government employees hit by the purge were Kurdish. Ankara is also constantly bombing the Qandil mountains in Iraq.

Kurdistan, where the organisation has its headquarters as well as many cities in southeast Turkey, is traditionally a PKK controlled area.

For the last three weeks the Turkish presence on Iraqi soil has been the object of a dispute with Iraqi Prime Minister Haider al-Habadi, who has repeatedly asked Turkey not to deploy its troops during the Mosul offensive. Ankara did not follow this request since Turkish tanks have been deployed on the frontline during the offensive against Bashiqa, on the eastern front.

The offensive to reconquer Mosul is not only a matter of national Iraqi interest, but also a war made of parallel wars where two major regional players, Iran and Turkey, are trying to expand their influence.